After our early morning onsen dip and castle sight-sightseeing, productivity was at an all-time low. Our muscles had been soaked in delicious 40°C stone indoor/outdoor baths, steamed in different herbal saunas and scrubbed with every complimentary soap and shampoo on offer.  Our cycling enthusiasm had been reduced to thinly veiled non-committal indifference. All we wanted was to nap and snooze. Plus Himeji was such a pretty city, the idea of a short day was an easy twist to our non-resisting arms.  The last couple of nights we had been finishing our riding in the dark, setting up camp in the rain, and waking up in the cold dawn in negative degrees.  Surely a little R&R was in order? A quick look up for accommodation in Himeji (using a Lawson convenience store wi-fi, always) concluded that yes, it was a Saturday – aaand everything was booked out.  What wasn’t, was too expensive for a spontaneous rest stop.

Leaning against our bikes in the middle of the town’s main strip, we discussed options. Suddenly we noticed that we were right next to a massive 5-level Internet cafe. Both of us had read that Internet cafes were a cheap accommodation alternative. The basic premise was a small pod, with a seat and computer, and either a reclining armchair or a padded floor, which you paid by the hour.  It was known to be pretty popular with business men on quick trips, as a student hangout, or for an easy nap after a boozy night.  Oh and accessible computer-y things. 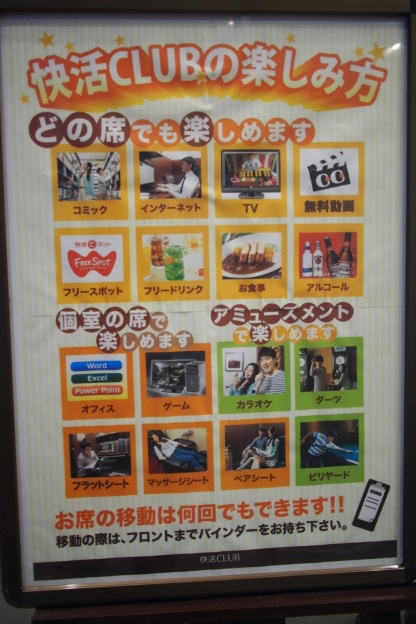 This particular one didn’t have any adjoining secure parking for bikes, being right on the main strip.  We would have had to park them in one of the many bike parking rows nearby, but not in visible distance of the place.  Also as pricing is per hour, and it was about noon, it would have been a bit silly to pay so much just to finish our day so early.

But it planted a seed.

Going back to the same Lawson, to use the wi-fi again, Cleave looked up the brand, and copy and pasted the Kanji, 快活ＣＬＵＢ on Google maps. It was in almost all major cities.

“Let’s ride out to the next one,” he said, “it’s only 30 km away”.  So we did just that. The weather was stunning and the ride was so nice, knowing that we had a definite ending to our day. Plus endless electricity to charge all the things! 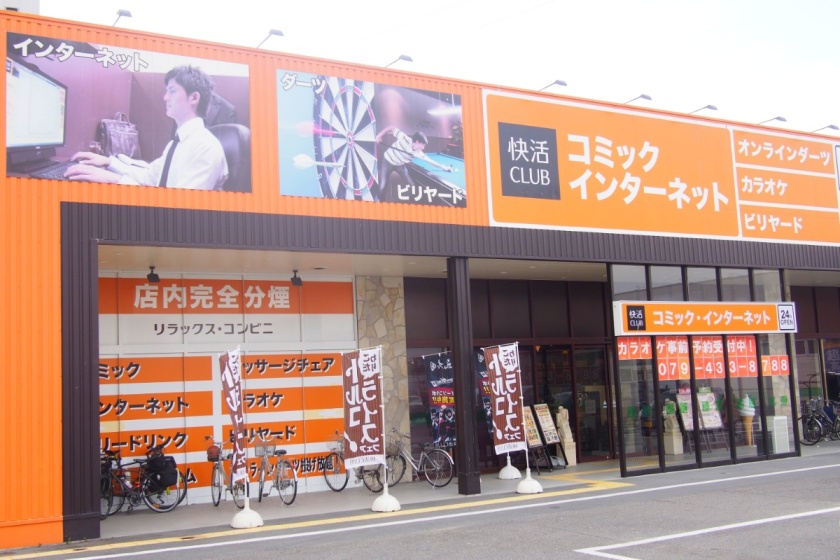 We finished out the day just after 4 pm.  This particular 快活ＣＬＵＢ was in a shopping complex, along with dollar store, a couple of restaurants, and a great big 24-hr MaxValu grocery store.  And we could park our bikes right at the front door, under the watchful eye of security cameras and the 24-hr front desk.

We walked in and signed up for a membership each with our passports, for just a few dollars.  This gave us access to any of the other Clubs in Japan.  We reserved a 12-hr stretch each for 8 pm.  You can request a double or singular pod, chair or padded floor, they’ll go through the options in a picture menu.  All the double pods were booked up, so we did two singular pods each.  To fill in time we walked around the neighbourhood, went to the dollar store for a peek and the MaxValu for a wander, to have dinner and load up on snacks.

Japanese grocery stores are a boon for options on pre-prepared food.  Most countries we had been to didn’t have too many pre-prepared or healthy options that weren’t frozen Lean Cuisine meals.  Eating a quick, cheap yet healthy meal in Japan, however, was as easy as dropping into a grocery store.  And far more delicious than whatever we could have cooked on our Trangia.  The onigiri triangles and bento box options were as far as the eye could see. 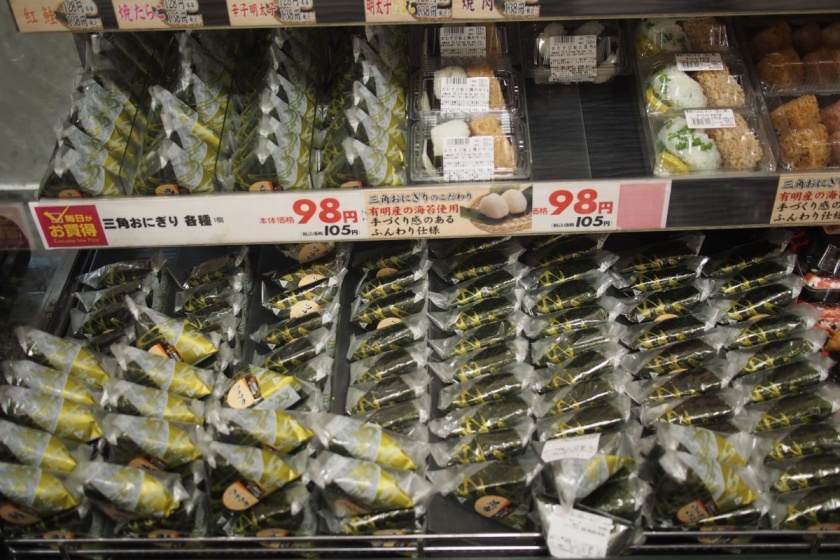 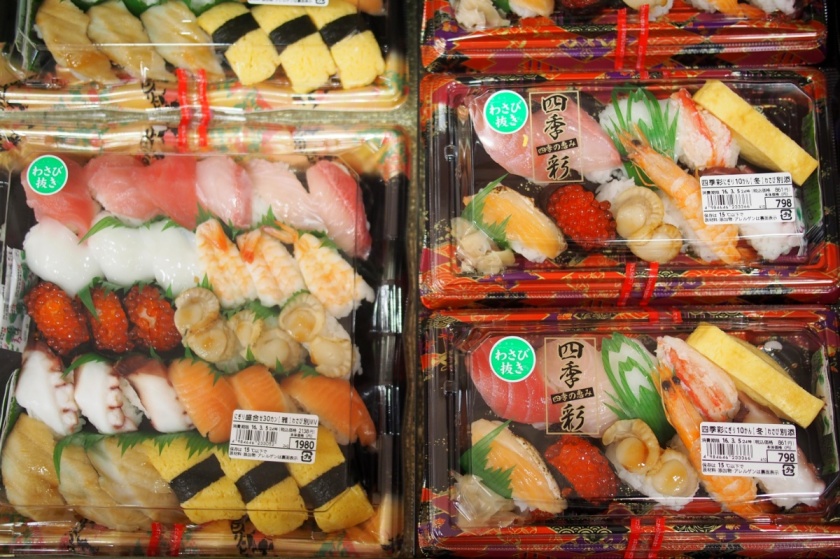 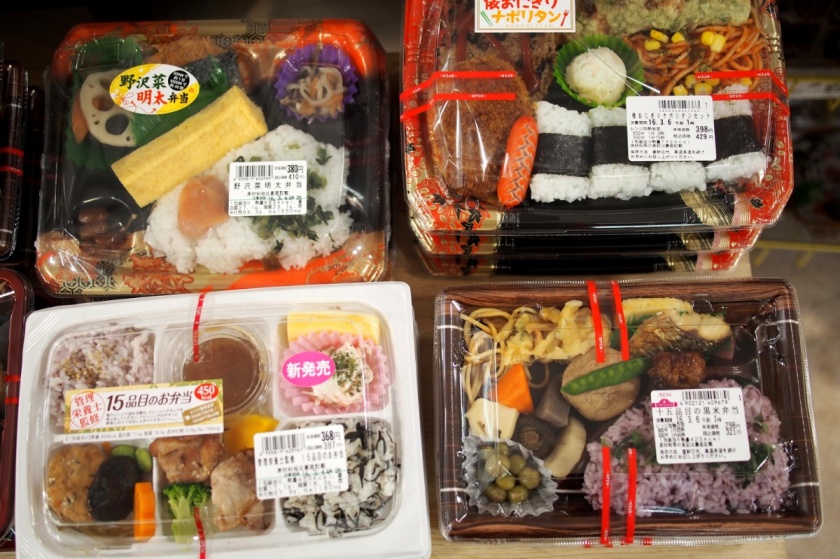 This one had a seating area with a little sink, microwave, rubbish and recycling bins, hot and cold drink machines and hot water dispensers for noodle cups.  It also had little cloths on each table to remind you to be considerate of others and not only put away your own rubbish but to wipe the table clean as well. 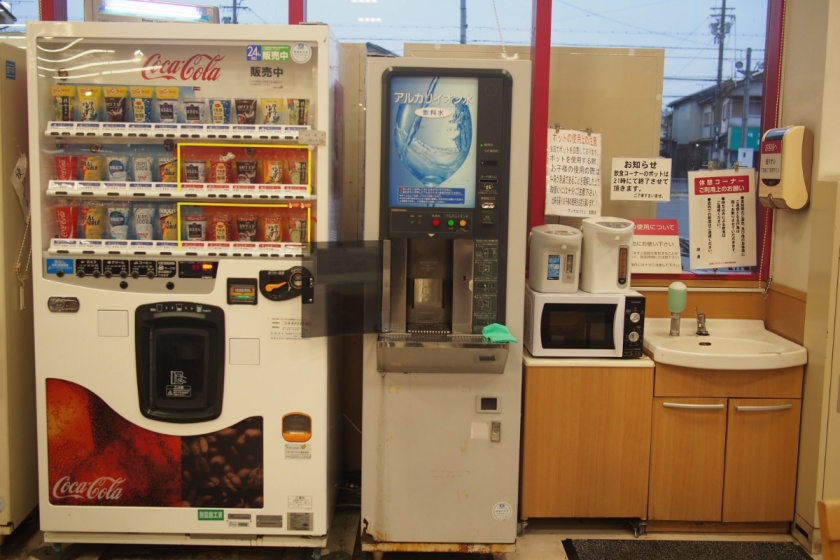 Our scheduled 8 pm rolled around pretty quickly and we could check in.  Perfect timing too, as all our electrical items were out of juice.  We plugged every single thing in, camera, phones, tablets and external battery.  And ourselves.

You can grab blankets, and pillows at the front desk.  And each pod came with slippers for the bathroom.  The fee also came with unlimited tea, coffee and hot water, and soft serve ice cream.

By the time I had explored everything and peeked over in Cleave’s pod, he had made himself pretty comfortable.

The next morning, 12 hours later at 8 am after our big snooze in the warm indoors, the day had a rosy glow.  Everything was a positive.  The air was crisp and clean!  The sky was a perfect blue!  Even the kindergarten buses looked like they had made a little extra effort.

The bike paths were wide and went through interesting towns and suburbs. 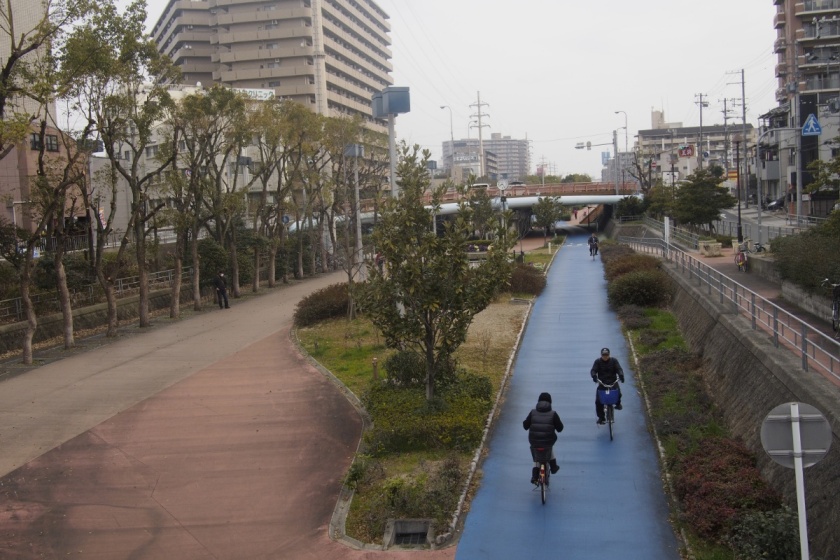 Temples popped in and out of the rows of white houses with blue roof tiles,

And we were greeted with our first Sakura (cherry blossoms).  The cherry blossom is considered the national flower of Japan and every year the Japanese Meteorological Agency, and the whole of Japan, track Sakura as it moves northward up along Japan, included nightly weather segments and news forecasts, special pink sakura products, and spring celebrations.  The season begins at the very south, in Okinawa in January and typically reaches the middle cities, Kyoto and Tokyo in March/April, and then the top of Japan in Hokkaido a few weeks later.  Sakura also hails the beginning of Hanami – en-masse picnics, or flower-viewing parties, where hundreds of people turn out in large parties to picnic, and drink, under the blooms.

There was no picnicking under this particular one, though.

This enthusiastic little tree was going to be the first of hundreds we would see, all the way to Osaka, Kyoto and on to Tokyo.