“Do you think we’ll see snow?” I said as we rode side by side.  We had seen tiny flakes lightly falling in the evenings, but it would melt as soon as they hit the pavement, and the skies would be clear by morning.  Our friends had been up in Hakuba, one of Japan’s popular ski areas, excitedly sending through pictures of skiing and snowboarding in white fluffy landscapes.  I was hoping we would see at least some ground coverage.

“Unlikely, we’re too far south,” Cleave said.  We were ascending our way up on National Highway #9, on our way to Tsuwano, a tiny town sandwiched between a bunch of mountains, and we were four days into our Japan leg.  It was 2°C, freezing, and we were alternating between unzipping all our layers while puffing up the hills or slowly going numb whenever we flew downhill.

I laughed at Cleave’s ability to wear shorts in any temperature.  “We need to keep a record of your fashion choice,” I wheezed, as his shapely legs spun in front of me.  Setting up the camera on a traffic barrier we took a, rare, picture of the both of us.  At that moment snow began to fall. 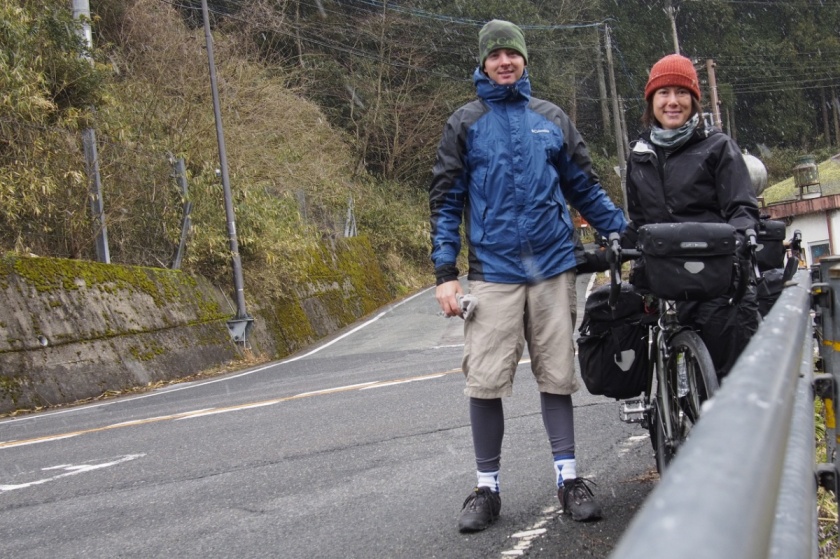 For the next few minutes we marvelled at the peaceful quiet serenity of our mountain top, the soft white flakes falling among the cedar trees, interspersed with excited squealing and snow tasting.

The snow continued, dusting the landscape in white.  What started as a few tiny flakes, began falling heavier and thicker, with no signs of slowing or melting.

“Let’s get off this mountain before we get stuck,” suggested Cleave, as the snow continued to fall.  As we descended down the zig zag the pretty soft snowflakes we had just been admiring turned into little sharp icicle missiles, jabbing us straight in the eyes.

As the bikes gained momentum, so did the icy slush whipping into our faces, and we yelped and squinted our way down, descending into the white fog.

It was noon but it was so incredibly dark.  The encroaching fog and snow had minimized visibility.  As all our rain gear and bags are black I was worried the cars wouldn’t see us.  Our gear was slowly absorbing the melted snow, our non-waterproof gloves soggily turning our fingers into prunes, our neck scarfs wet against our faces.

Finally we reached the base, and the town of Tsuwano. 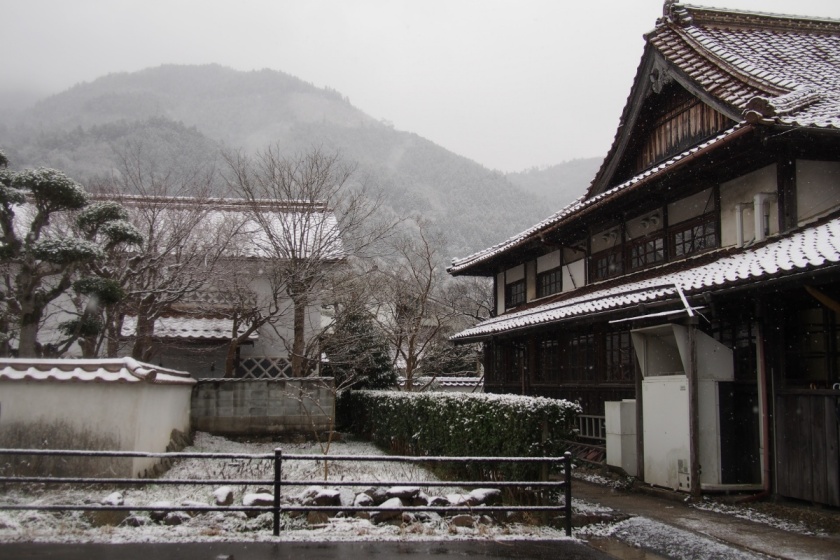 The only convenience store didn’t have WiFi.  The staff stared at us squelching in, cold and wet, trailing puddles behind us.  We were the only ones not exiting from a warm dry heated car, jaunty in the spring snow storm.  We took our puddles outside with us.  “What’s the plan, Stan?” I inquired, with no alternative agenda whatsoever.  Cleave gently reminded me we still had 50km to go. 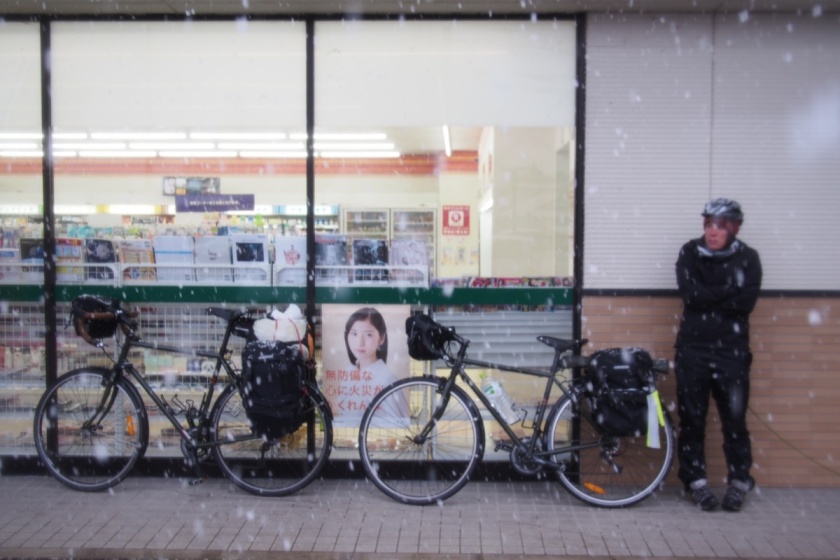 Well at least the tunnels were dry. 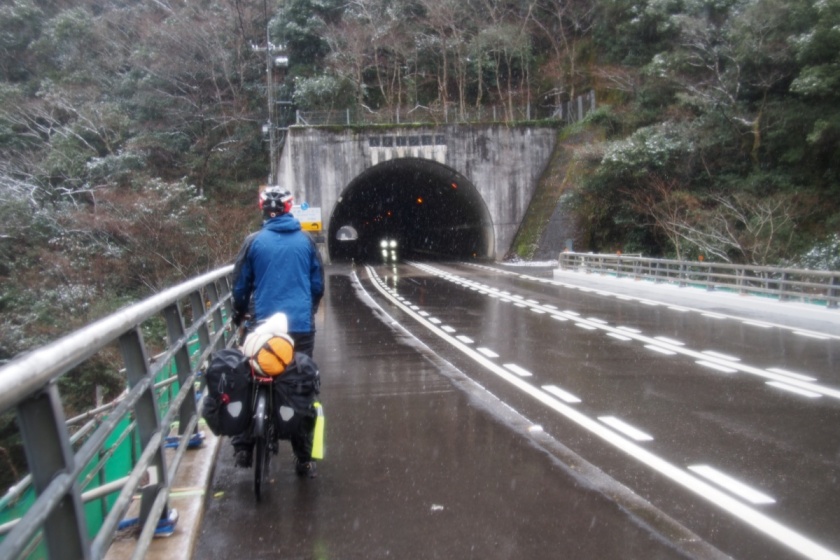 Finally we reached our target finish line, Yoshika.  As we didn’t have WiFi we followed the signs to the Town Hall, where a friendly lady gave us directions to the nearest onsen, which she said had a hotel attached.  Arriving it seemed to be a very fancy onsen with a ryokan attached.  “This will be out of our Budget,” said Cleave.  I gently reminded him that last night we slept in a bus stop.

With absolute professionalism and a very blind eye to our disheveled state we were promptly checked in and shown to our ‘basic’ room.  When the doors closed, we bounded around with glee.  It was incredible!

Our room came with a kotatsu, a small table with a heating element under it and a padded quilt to keep the heat in.  (Our wet beanies, gloves, socks and other bits were pushed under there). 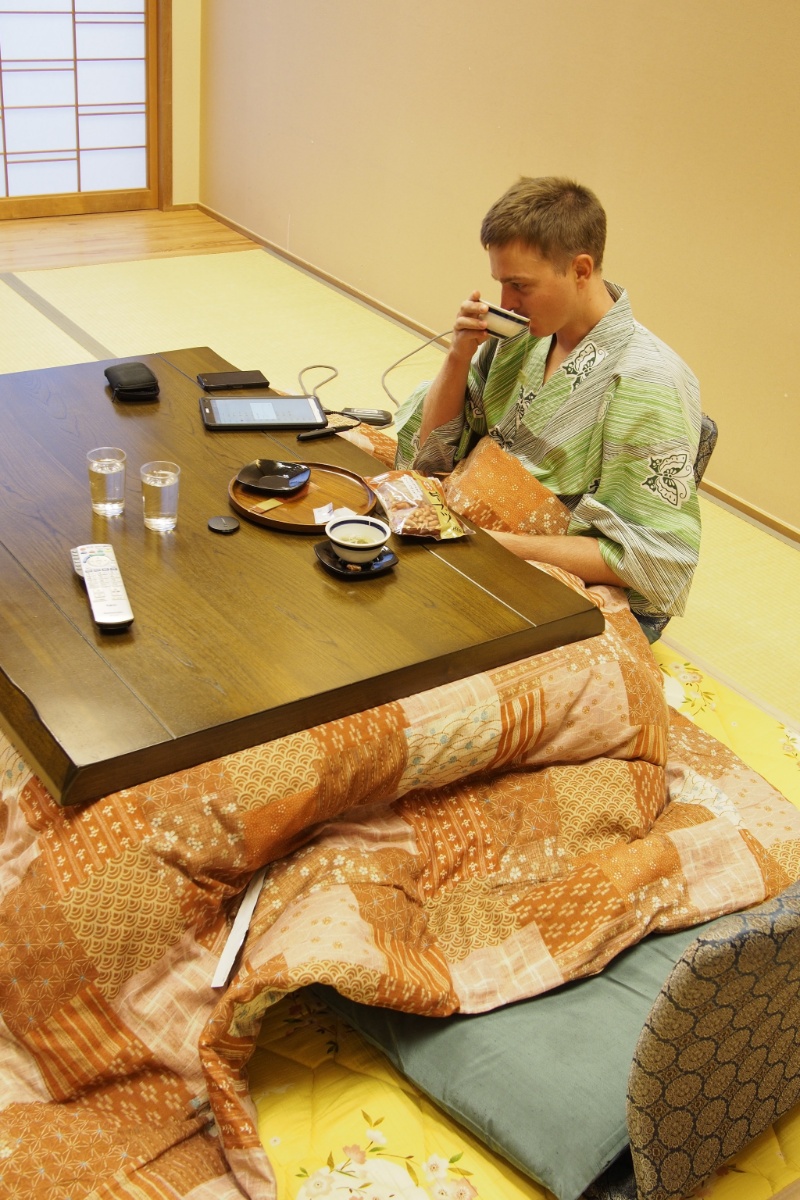 Neatly folded were freshly pressed yukatas, casual kimonos often supplied as night clothes and to wear back and forth from the onsen. 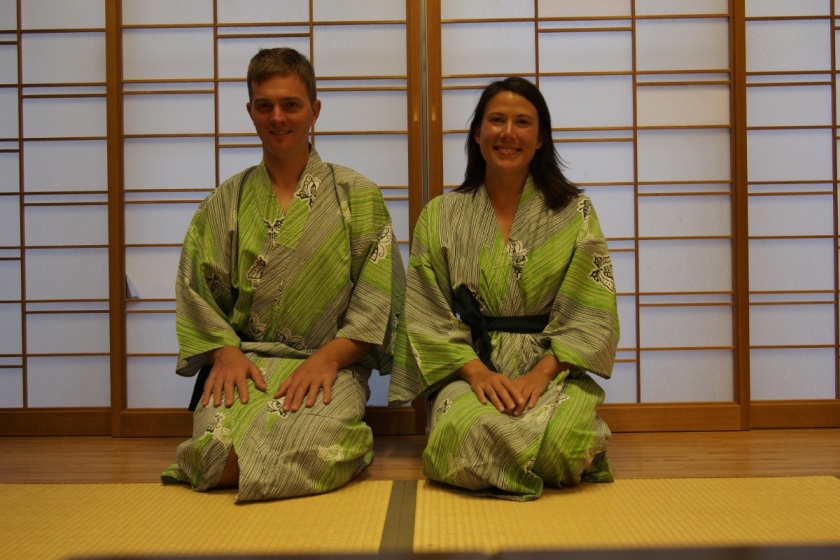 As we had been wild camping we hadn’t had a shower in three days.  We were dressed in our yukatas quick smart and out the door, separating into the men and women onsen facilities.  Japan has thousands of onsens, highly popular public bathing houses, each with different baths supplied by hot springs, minerals and temperatures.  This particular onsen had, among others, a small stone bath outside surrounded by a rocky garden.  It was unbelievably beautiful to sit outside in the steaming hot spring bath with the snow falling around.

By the time we had finished we returned to our room to find they had set out our futons.  We slept unbelievably well.

The next day was a traditional Japanese breakfast, and one quick early morning dip in the onsen.

It was still snowing, but we were completely ready to smash out the last 100kms to Hiroshima!