We sat drowsy and disoriented from our night in the clouds, with a commotion unfolding a few seats down.  An elderly Japanese man intent on getting his luggage first was trying to barge past a couple, repeatedly hitting the wife with his briefcase.  The yelling had escalated but the old guy was refusing to register any delay to his plan.  The husband had had enough, and with a ballet-style lift he took old man through the air straight over the top of the two seats, and pinned him to the aisle floor, citizen’s arrest style.  “I thought Japanese people were nice,” said Suyin, as the flight attendants finally got through the crowded aisle and took over the situation.  “Old men can be jerks too,” I replied.  We watched the two men being separately walked off the plane for statements.  If that was the first minute on Japanese soil, it was going to be an interesting two months.

After assembling the bicycles and repacking the panniers we emerged into the chilling Fukuoka air.  A brisk 5°C, completely opposite to 30°C we had just come from in Thailand.  We had just reached the centre of the city when Suyin announced her front brakes were not working.  I haphazardly played around with the adjustment screw, and managed to break the casing and thus the entire mechanism.  Making myself feel better I told Suyin that it was pretty stuffed anyway and was due for replacement.  It was doubtful that she believed me.  Using my Japanese, that had long faded from memory, we were given directions to Uemura Cycle Parts.  This shop was a utopia for cyclists, with every item imaginable.

We purchased a new front brake assembly.  Saving $10 I installed it myself in front of the shop, by just reversing the process of taking the old one off.  Stepping back to admire my handiwork my own front tire must have felt neglected, because it decided to deflate in protest.  While being suspended in the air mind you. 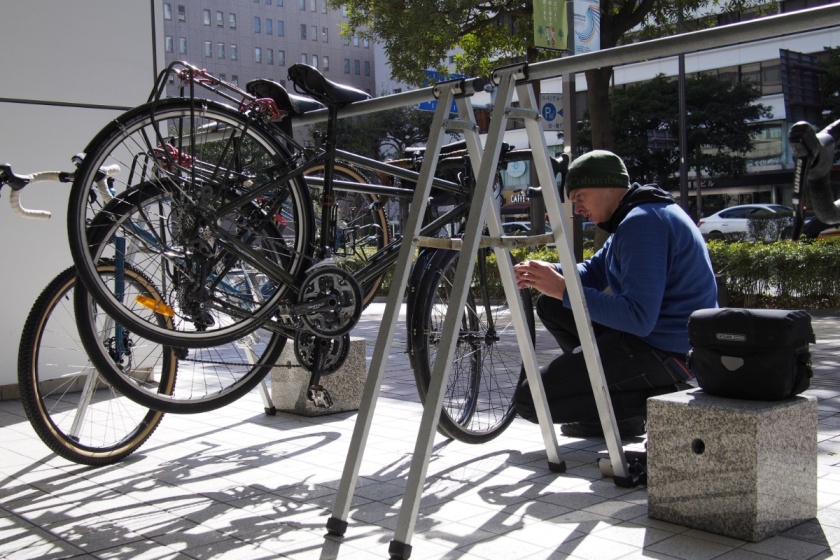 The air was so cold that it caused one of my puncture patches to pop off.  Fed up with already spending half the day building and fixing the bikes, we left them at the store, for them to replace my inner tube, as well as my cheap Malay rear tire which was on its way out.  It was now past 2pm, and having not eaten since 6:30pm yesterday we were starving.  Using convenience store WiFi we looked up best ramen in Fukuoka, wanting something to celebrate our first day in Japan.  Fukuoka delivered – not just one ramen restaurant but an entire Ramen Stadium. 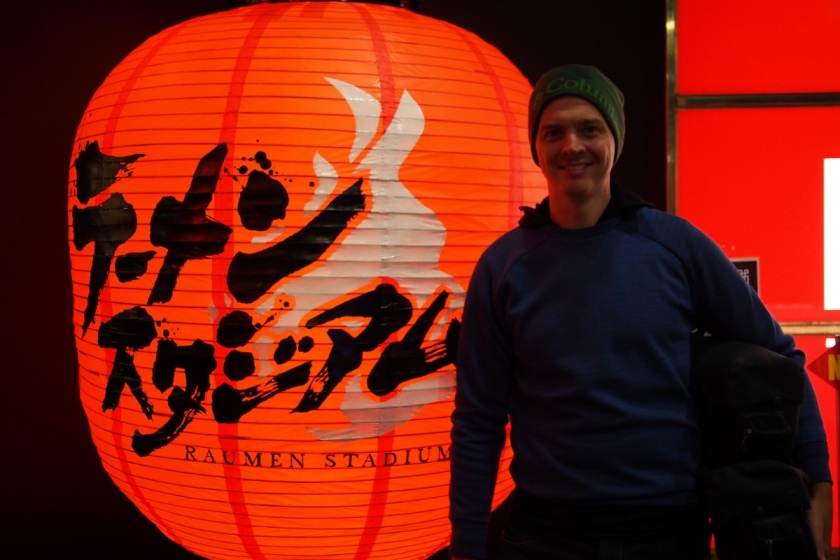 The fifth floor of Canal City department store is dedicated to a cluster of ramen shops, each serving a particular signature speciality.

We made our order from the vending machine and went in and sat down.  Five minutes later we were eating our very first meal in Japan. 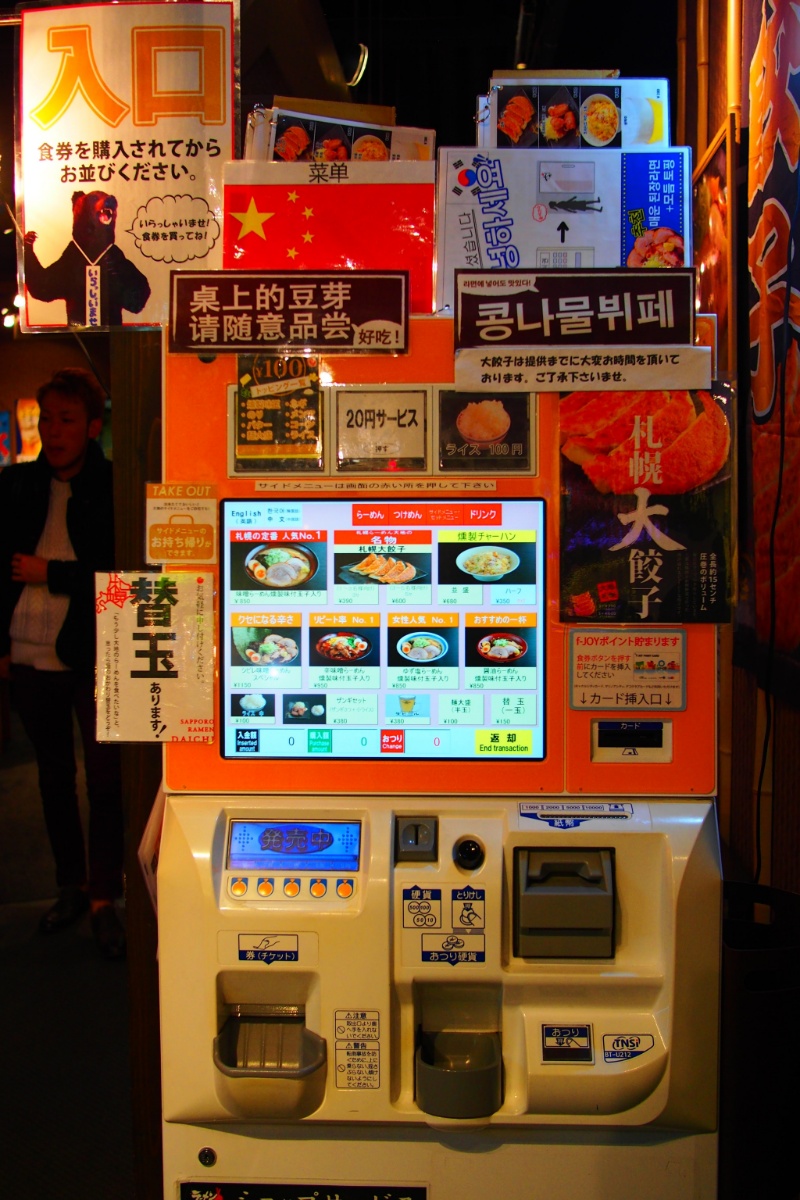 Picking our bikes up from the store, a quick ride around the city and checking in to a hotel, we were stuffed.  The next day we had our energy back, ready to start our first ride towards Tokyo. 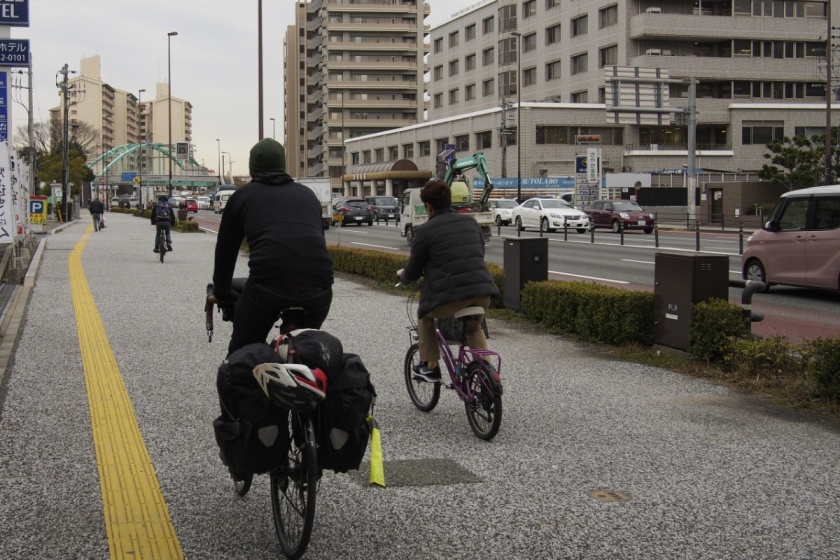 Japan welcomed us with sleet, fog, rain and mountains.  With the weather hovering around 7°C by noon we found ourselves adding more and more layers to try to combat the rude awakening of minus zero temperatures at 3am.

The bike infrastructure was amazing though, with huge wide pedestrian paths in cities and even proper bike tracks separate to the country roads. 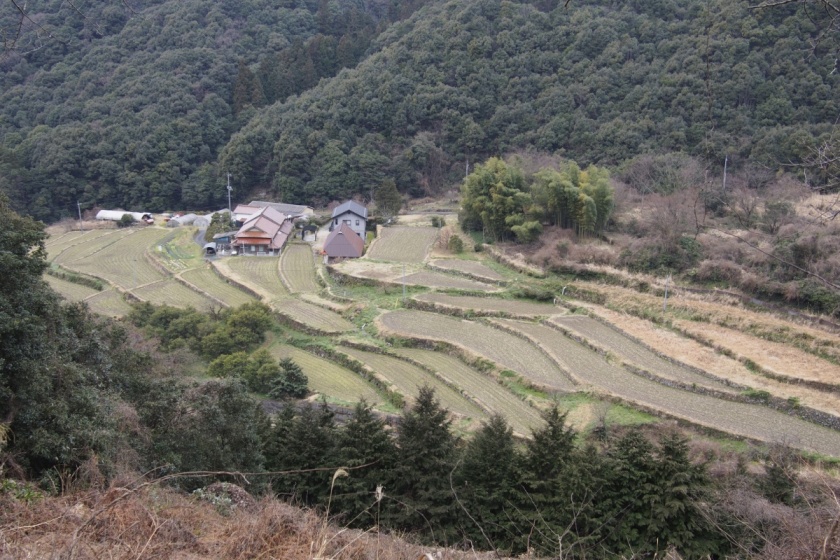 Even the statues dotted along the sides of the road were rugged up.

Wild camping in Japan turned out to be quite easy.  The first night on the road we found ourselves camping in a closed municipal campground.  Many of the cities have free municipal campsites with limited facilities like toilets and barbeques.  Although wild camping is not technically legal in Japan it is tolerated.  As long as you are respectful, discrete, and not on private property it is unlikely that you will be bothered. 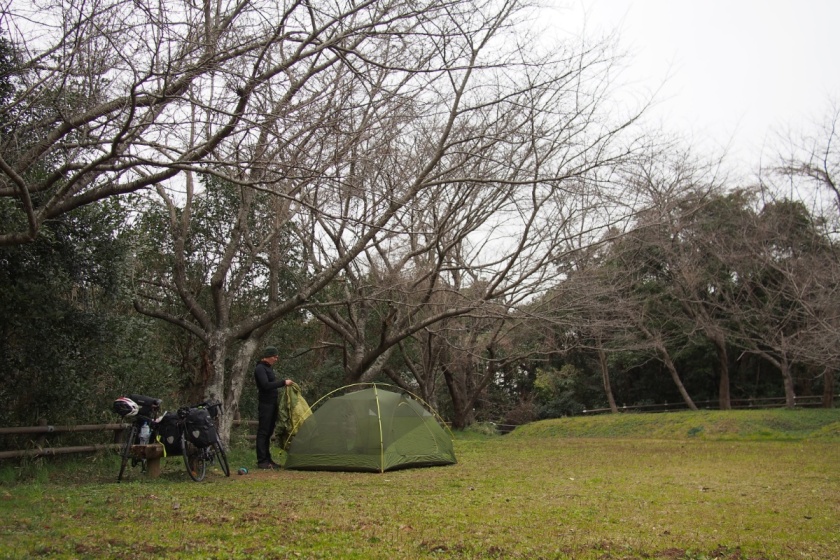 Our second night we found a quiet disused carpark and discovered that camping on bitumen is far colder than grass.

On our third night rain, then snow, began to fall as we stood in front of a 7/11 eating dinner.  Unwilling to put up the tent in a freezing wet muddy field, we went in search for a ‘campsite’ with a roof.  We almost decided to sleep inside a small train station, but it was too small to be discrete, and the trains ran almost 24 hours.  We were heading back to the warmth of the 7/11 to have a rethink when we spotted a bus stop.  With the buses stopping at 7:30pm it was perfect.

Other places we camped were the corner of local parks, as they came with bathrooms and vending machines serving hot drinks.  Easy meals and snacks were found at convenience stores, which could be found every few kilometers. 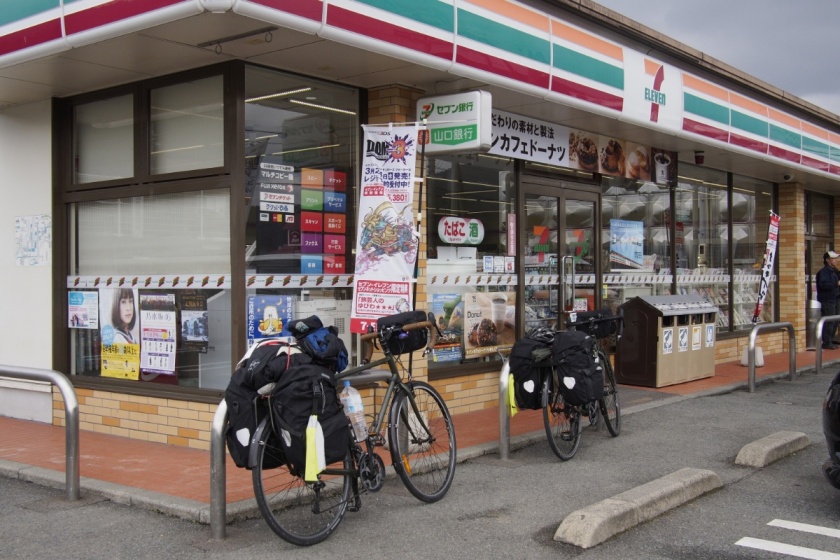 Most of the convenience stores were equipped with free Wifi, toilets, microwaves and boiling water.  If we were extra lucky they would also have tables and chairs.

The kindness of Japanese people was amazing.  Or maybe they just pitied us in the freezing weather.  Strangers would spot us and gift us hot food and wish us well Ganbatte! (頑張って) which translates roughly as ‘Do your best!’. 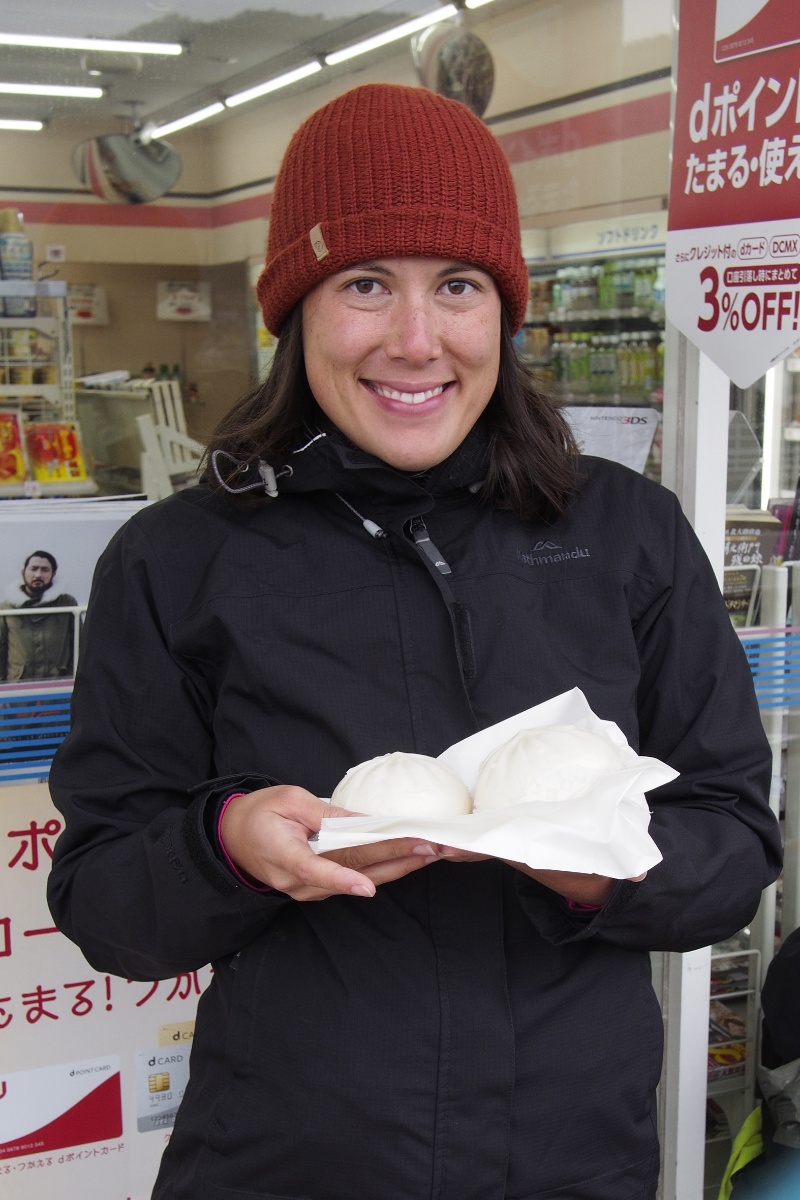 Suyin was particularly happy when she was gifted a Minion toy on one of our ferry crossings.

With mountains, ferry crossings and loaded bikes we discovered that our maximum distance was 75kms a day before we ran out of daylight at 5:30 pm.  We recalibrating our schedule to account for this, skipping some rest days that we had planned.  Water crossing were common place, with Japan being made up of 6,852 islands.  Our first major island hop was from Kyushu to Honshu. 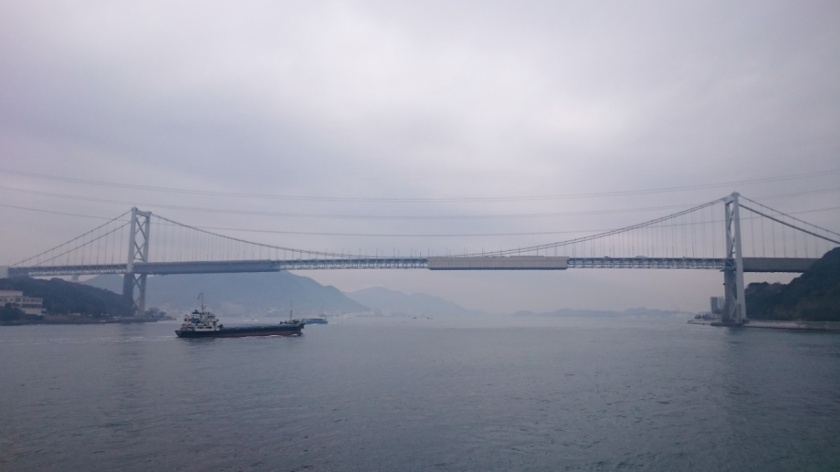 We found the 750m Kanmon Pedestrian and Bicycle Tunnel, which joins Kyushu to Honshu, under the ocean.  The free crossing is popular with morning joggers who run back and forth underground between the islands. 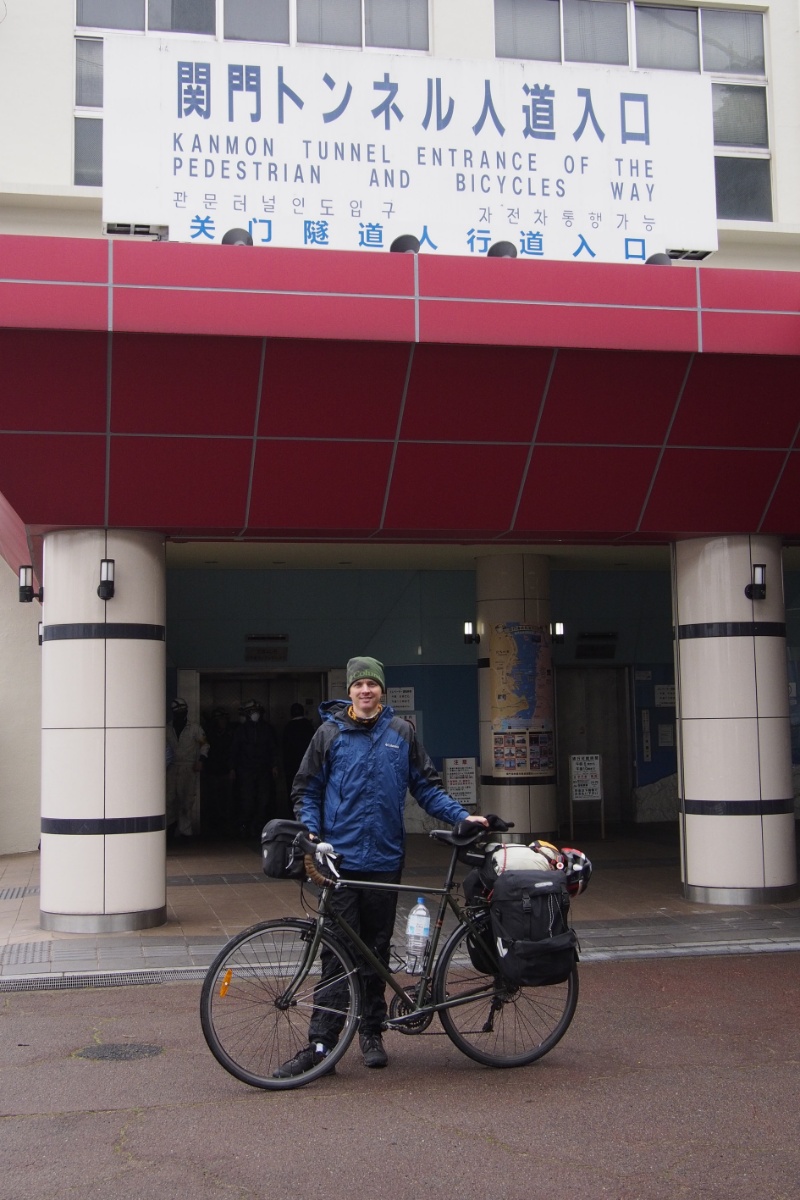 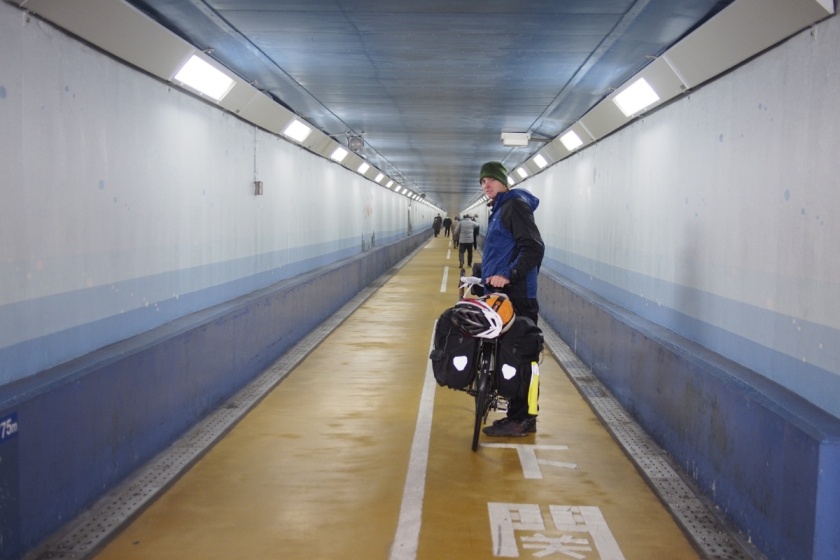 And a sad Tommy Lee Jones gazing off into the distance, re-evaluating his life choices promoting Boss Coffee. 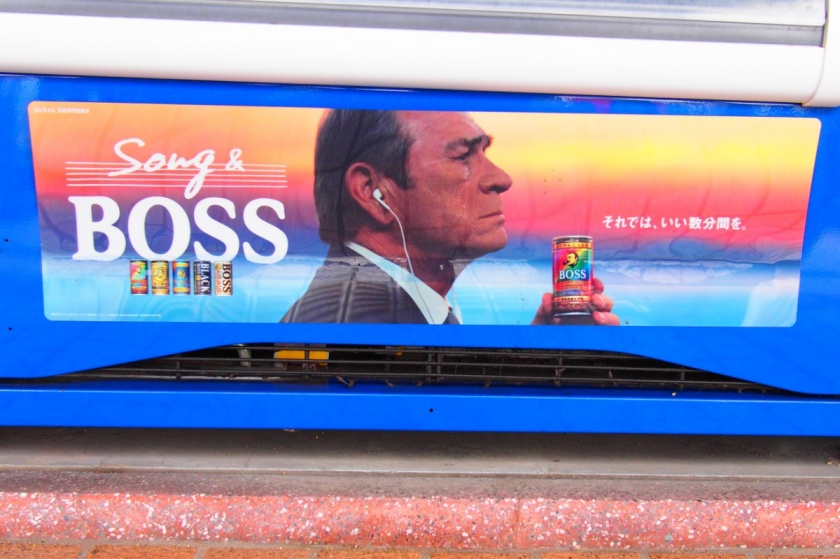