We spent a little under two months in Thailand, riding over 1,200km, which was stretched over 20 riding days, and quite a lot of downtime.  Our daily distances ranged from 122km at our highest, down to a mere 7km on our lowest (us skirting into Bangkok).  We travelled north from the border of Malaysia to the capital of Bangkok, hitting the following towns:

We could travel really long distances in a short space of time as most of our rides were flat with just a couple of hills here and there, but nothing too steep.  In fact most of our days finished around 3pm.  The biggest thing we had to watch out for was sunburn, dehydration, and dogs deciding to chase the bikes.  But these were under control with long sleeves, frequent 7/11 stops and sudden bursts of speed.  Most of the chasers we encountered gave up pretty easily, resorting to barking their heads off instead.  At one point we had seven dogs running after us!

The landscape would change from sandy beaches and shrimp farms, to sap and coconut plantations, to dusty empty one-lane towns, to buzzing busy cities.  But whenever we were near the coastline – those were our favourite riding days.  Firstly you’re never too far from a beach, 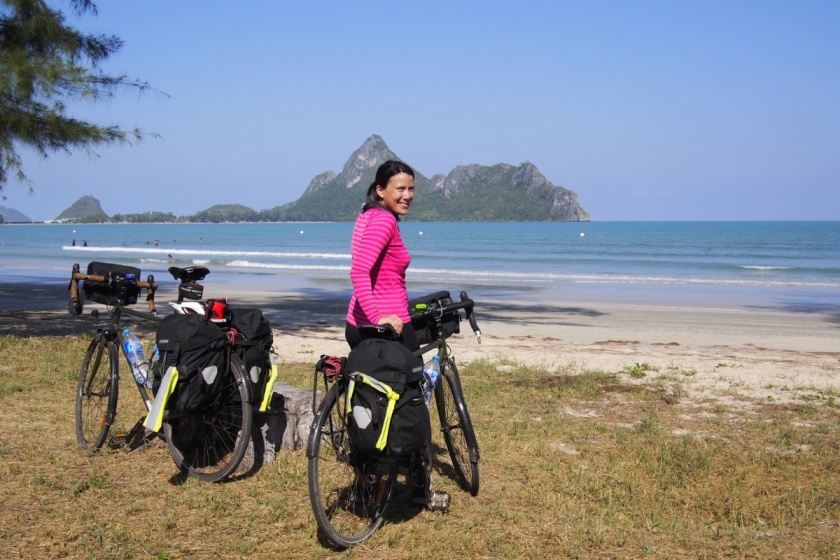 We would try to ride next to the coastline as much as possible, until a river would force us back inland.

Working our way across canals and bridges,

Fishing boats were a strong hint that an open air market would be nearby,

Water from the rivers would be channeled into smaller ditches and out into rice paddies.

Houses are built high to catch the breezes, with farming equipment and usually a hammock swinging underneath.  Huge terracotta water storage or klong jars can be seen; as many as twenty are placed around a typical house.  Strong and sturdy, the density helps keep the water, rice or rice wine, cool in the heat. 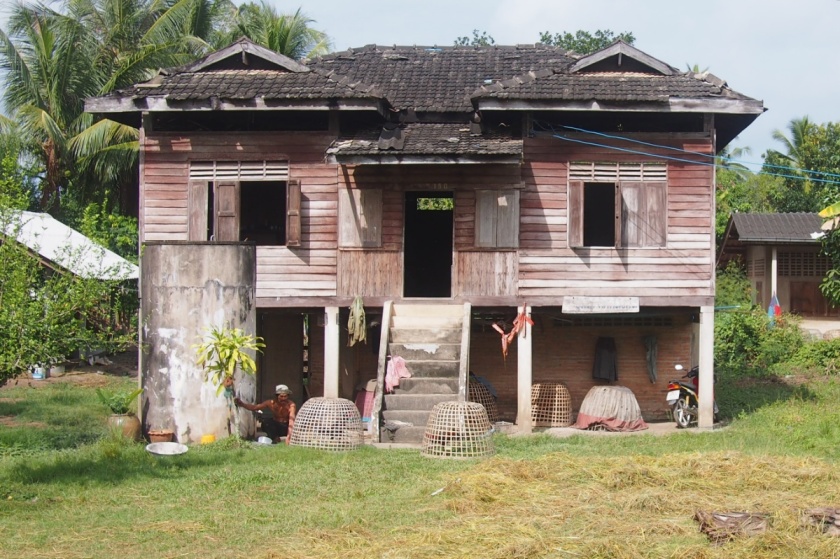 Scooters with a sidecar are the Thai workhorses, seen everywhere carrying stock for market stalls, ferrying people and all manner of items.

So much so, kid’s bicycles have a miniature sidecar version, creating stability similar to training wheels. 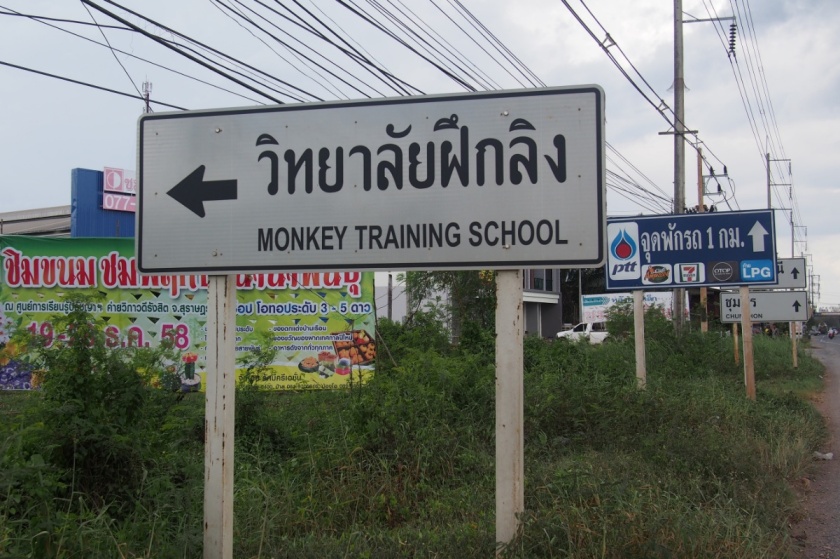 Until we meet this guy below.  Monkeys, usually pigtail macaques, are trained to be a valued part of a coconut plantation.  They are taught to shimmy up the palms on a long lead, and harvest the coconuts by spinning them with their hands or feet.  They’re even taught to free their line if it gets tangled, and help bag up the picked coconuts. 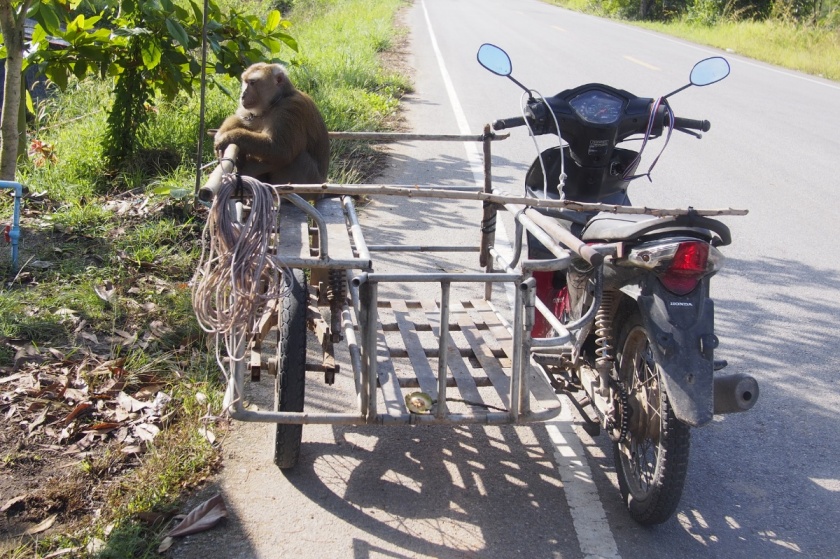 As soon as we figured this out, we started seeing coconut monkeys frequently; riding on the front of scooters and trucks.  One truck rode past with five workers and three monkeys clinging to the pickup canopy.

Out of all the landscapes, riding through the national parks would be so serene as there would be barely any traffic. The Khao Sam Roi Yot National Park was the nicest section we came across.  Straight flat roads through towering limestone cliffs and wetlands – it was one of the best days we’ve had, apart from the headwind.  Freshwater marsh covers nearly 37% of the national park which makes it the largest wetlands area in Thailand.  Just make sure you have water and snacks as there are, obviously, no grocery stores until you leave the national parks. 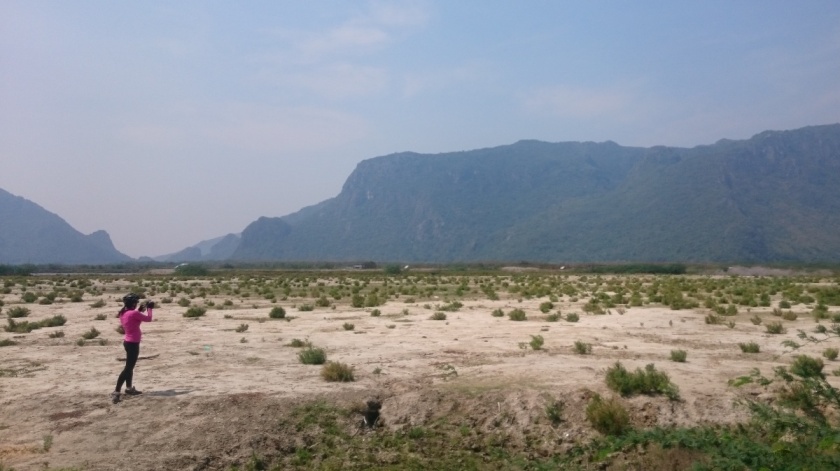 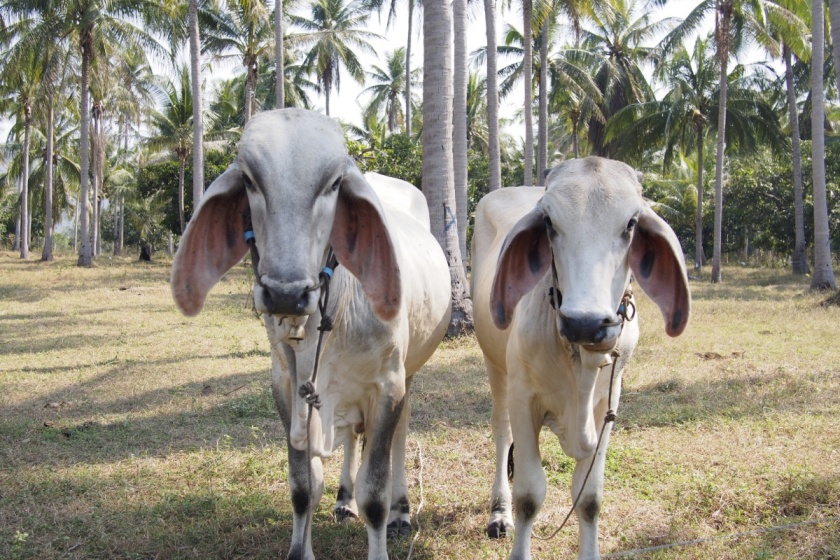 This section was also where we met the most amount of bike tourers in shortest space of time.  First was an Englishman, then three Australians, then a Dutch couple and another Dutchman.  However they were all going the opposite way, and were pretty stoked about the tailwind they were getting!

We also met the most unusual tourer – a guy on a long board.  He was travelling from Saigon to Singapore, pulling his gear via a trailer with a rigged up rope hand brake.  If you want to check him out his blog is A Couple of Spins.

It was here we met two English tourers, Richard and Rosemary, who saved us quite a few baht, in Sam Roi Yot.  The beach front was full of unbelievably overpriced crappy rundown hotels, and we were just about to cycle out of town for a better price when Richard called out from the beach.  They pointed us towards their accommodation, Asia Nature Bicycle Tour, a bike shop that had a cheap dormitory out the back.  What a brilliant save!  After settling in we spent the afternoon chatting so much, the restaurant kitchen closed and we had to make do with what we could rustle up from a tiny convenience store: two-minute noodles and biscuits. 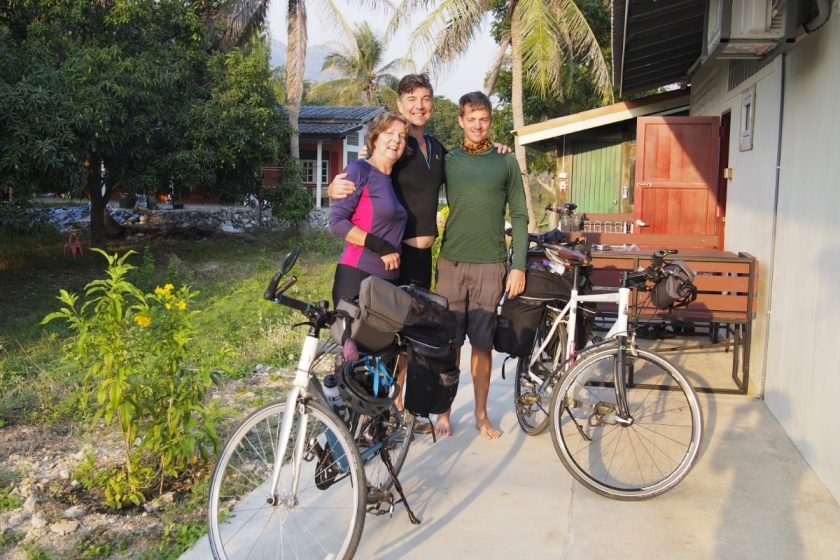 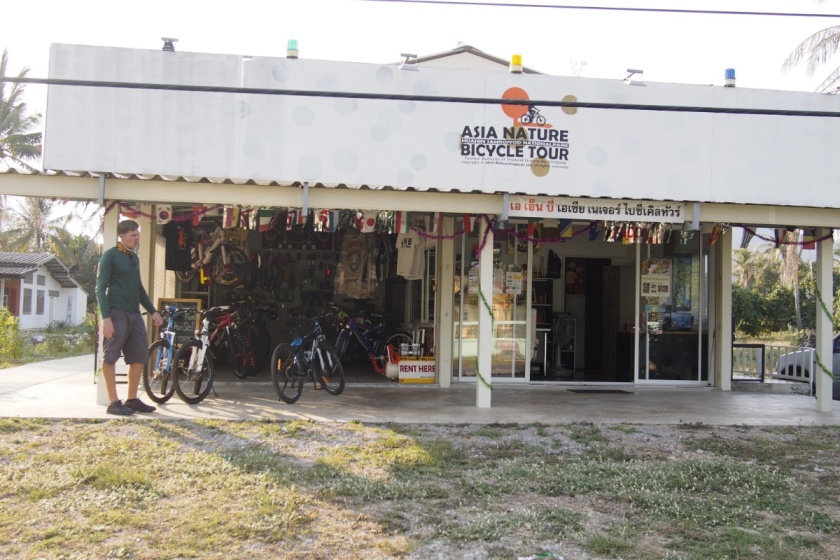 Despite that meagre dinner, food or drinking water was never a problem as 7/11’s, Tescos, fresh markets, restaurants and smaller local grocery stores are in every town.  The 7/11’s are huge, with everything from rice meals to alcohol, even ham and cheese toasted sandwiches. 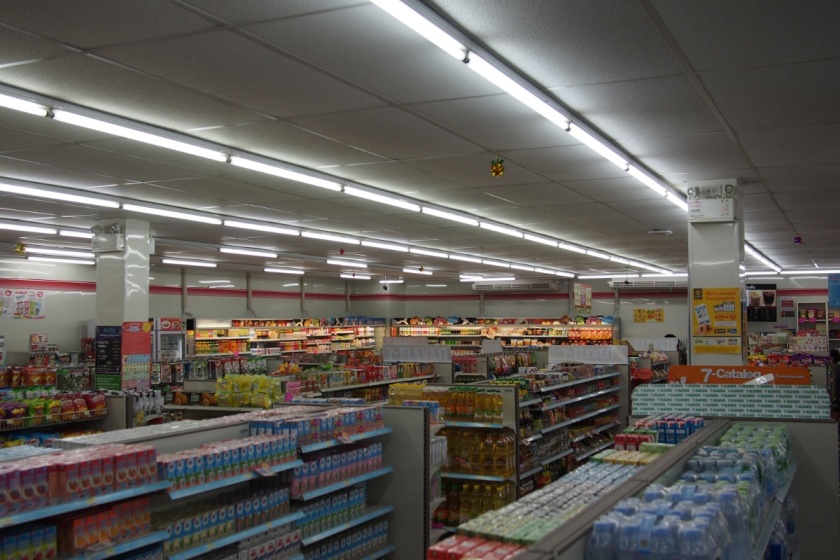 The local grocery stores are cheaper but usually don’t have fresh fruit or veggies.  They have bulk rice, snacks, tissues etc. 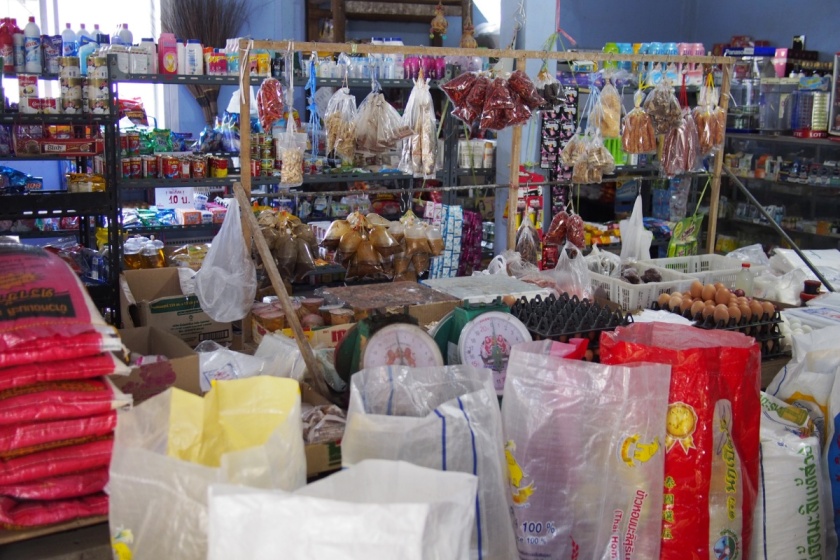 We loved Thai soda water, we pretty much had one every day.

And always looked out for a mango sticky rice stall in the markets.  Fresh mango sliced over sticky rice, and then topped with condensed milk and rice bubbles – the best!

For the last two months we had encountered every sized town, from tiny to huge and were ready for the craziest crowds of all – Bangkok.  One last pause of peace and quiet…