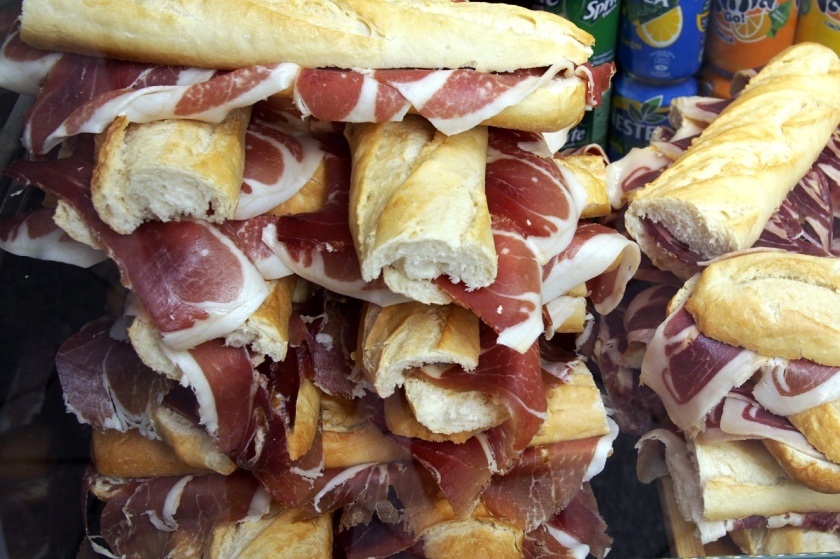 From no-nonsense simplicity to gastronomical science, Madrid takes its food reputation, and by food I mean meat, very seriously.  Whether it be a slice of jamon between two bits of bread or tender slivers of beef blowtorched to the minute level of char, you can be sure this is a city where meat in all its forms, cuts and history, is glorified to an almost revered state.  We worked our way from the bottom of the carnivore pyramid, from basic street bars, right to the top ending with conceptual tapas where the finishing touches are placed on with tweezers.

Starting from street level there are hundreds of bars to choose from, it feels like all you have to do is to start walking and soon enough you’ll come across people spilling out of doorways and cramped bolt holes, no bigger than a corridor.  Being mostly on a budget ourselves we created our own bar crawl with a twist.  We would check out bars that only offered free tapas with your alcoholic beverage.  A small complimentary tapa is common in other parts of Spain but in Madrid it’s rare, a few olives if at all.  Fair enough, but we love a challenge – what could we get for free with a beer?

The most value for money was El Tigre, which no matter what drink or size you ordered a dinner plate piled with nibbles would be quickly plonked down.  This is not dainty nor does it even pretend to be.  This is straight up lining your stomach for a long night of drinking along with the rest of the raucous youth who are readying for a big one.  Our total bill, two massive beers that came with a dinner plate each was €6/$9AUS. 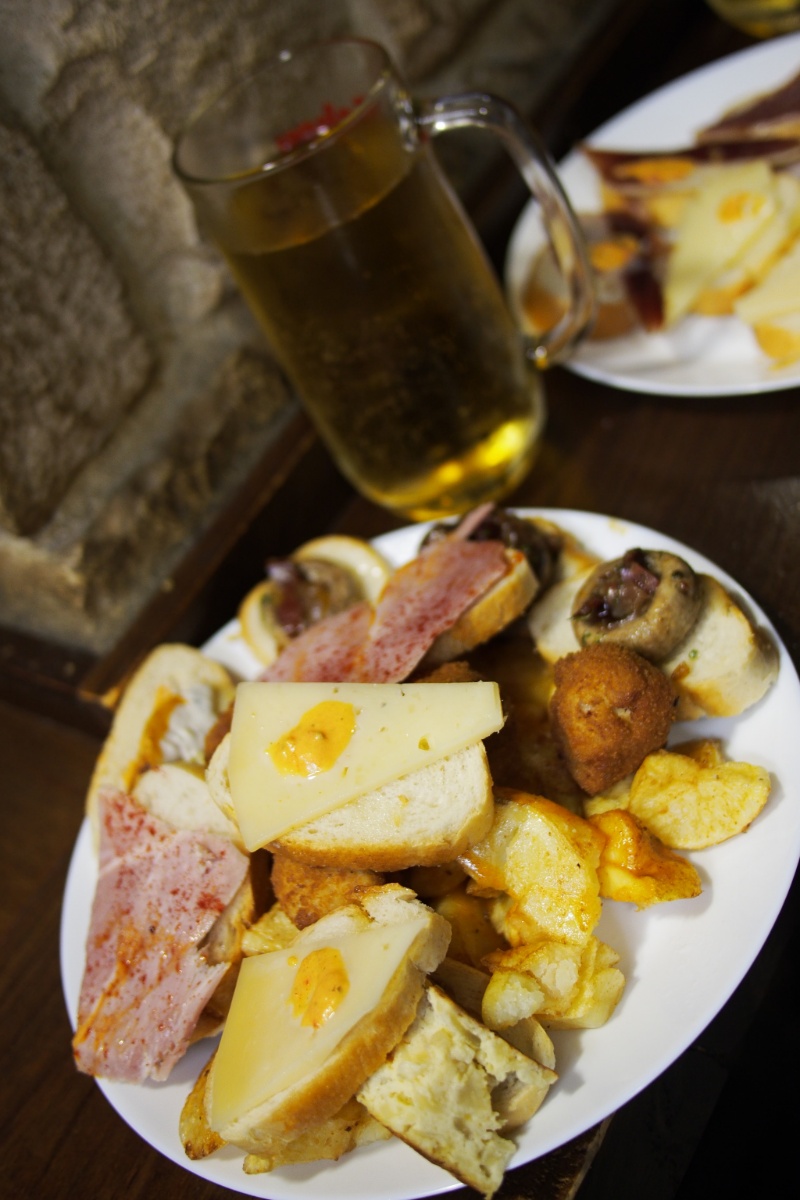 Others we tried out and also loved were: Petis Queira, El Rincon Abulense and A’canada Restaurant. These are proper local bars, more in line with the traditional small mouthful; a sliver of omelette, a scattering of fried peppers, a grilled sardine.  It was fun to slip from bar to bar, nibbling as we went.

Another ridiculously cheap snack came from Museo del Jamon.  We squeezed our way through the crowd and politely inched a space at the bar. 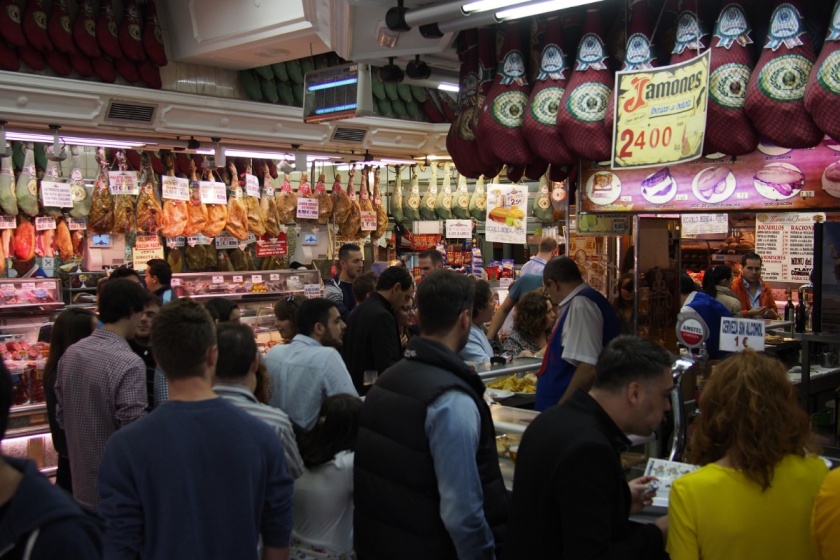 Spain’s love of pork hits you from every angle, from the cured legs of jamon, hooves and all, hanging from the ceiling, to the deli counter stocked of more sliced meats, stretching along one wall.  It’s a chain restaurant so don’t order fancy, stick with the basic beer and sandwiches, and enjoy the busy cheerful atmosphere. 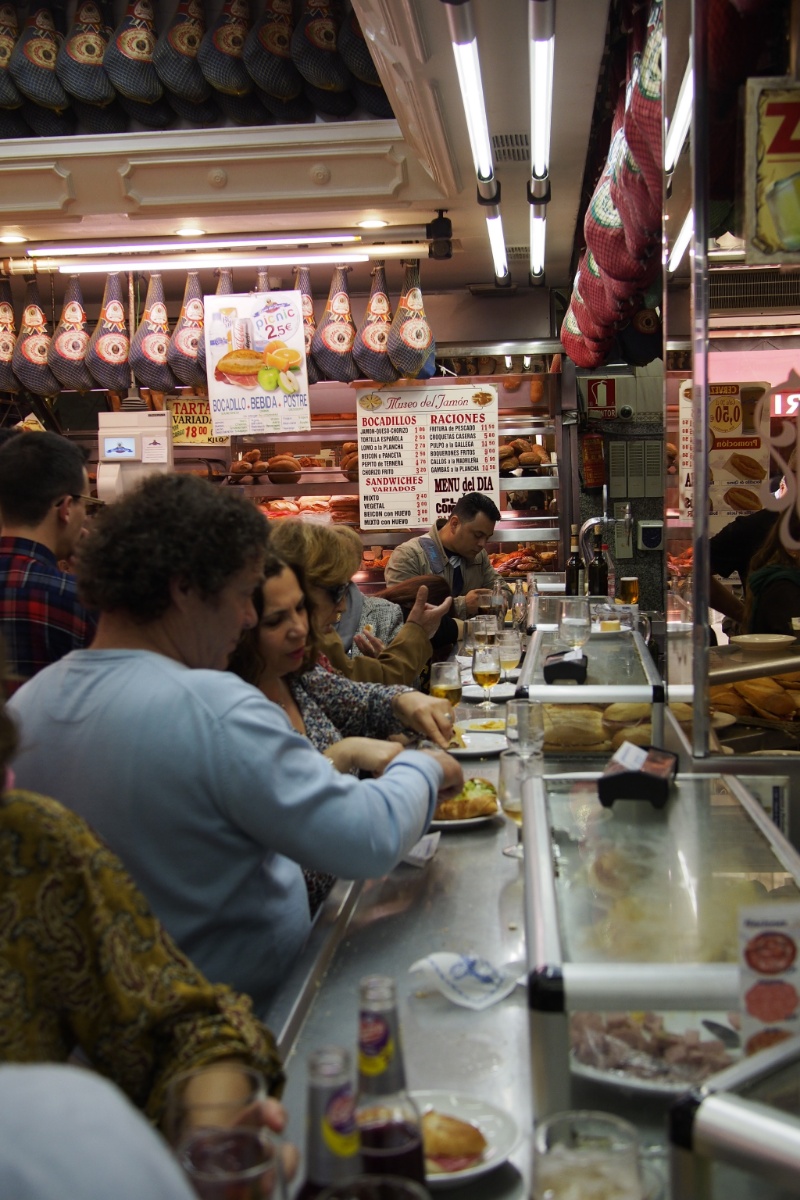 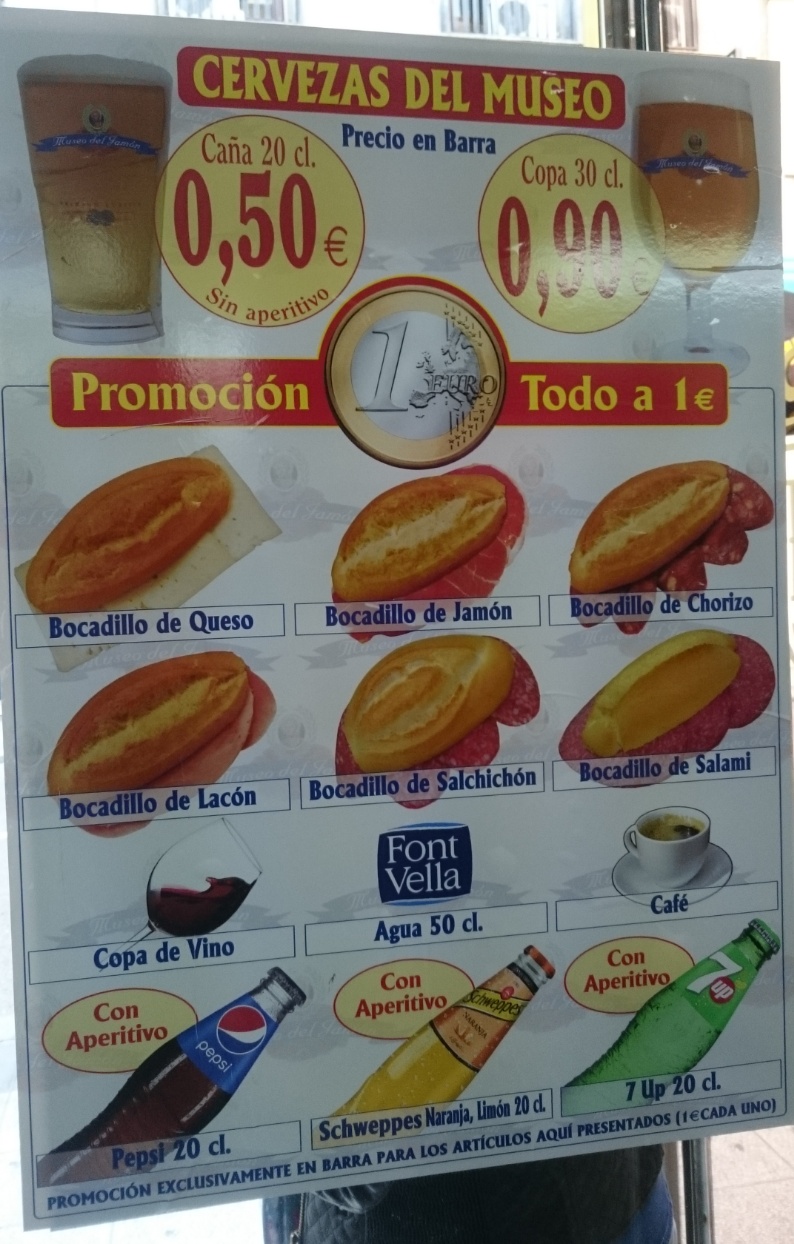 We ordered a glass of beer each at €0.90/$1.40AUS and a ham and cheese croissant for €2/$3AUS.  The bartender threw in some tiny mini salami buns for luck. 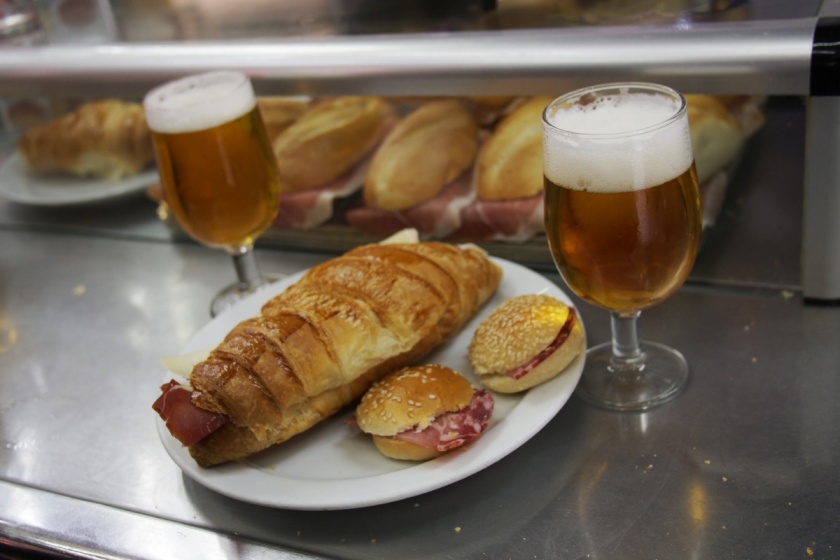 In the middle ground is the Mercado de San Miguel, a foodies market covered in iron and glass facade, built in 1916.  There are a few food markets all around Madrid, this is just the closest to the centre. 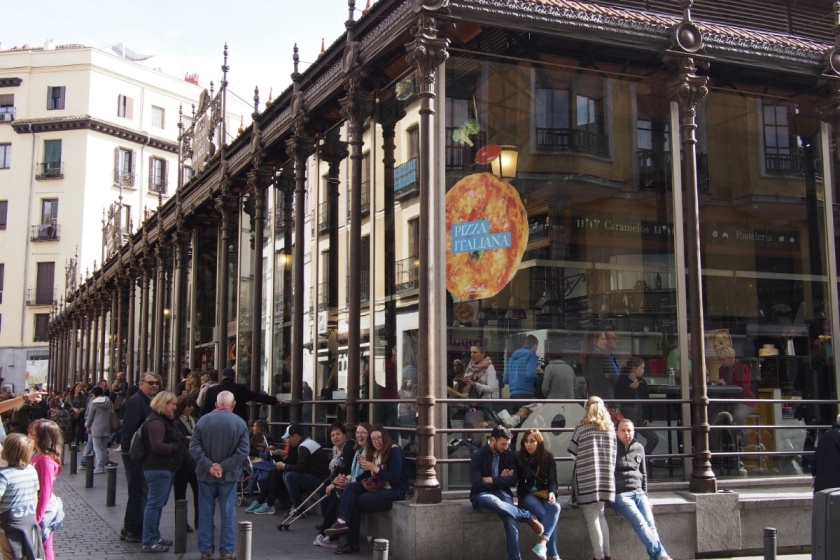 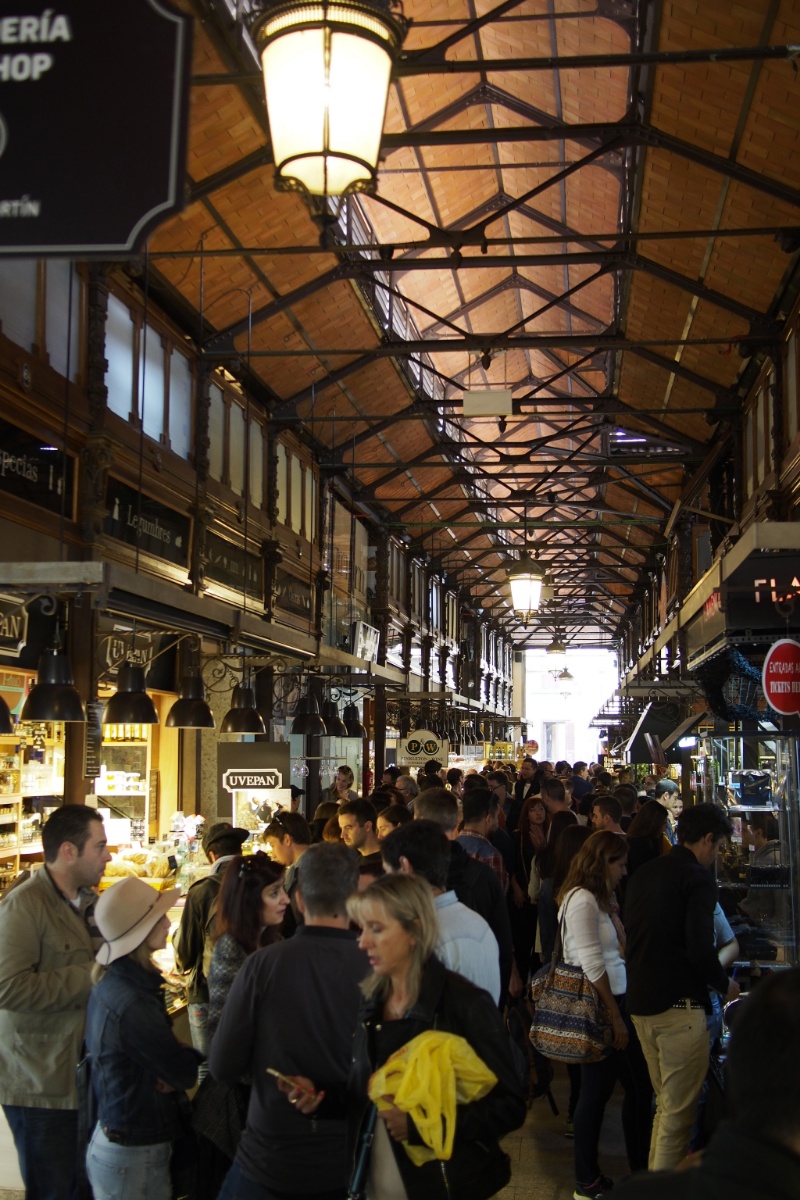 The wall of hanging iberico jamon caught our eye at the MAS Gourmets stall. 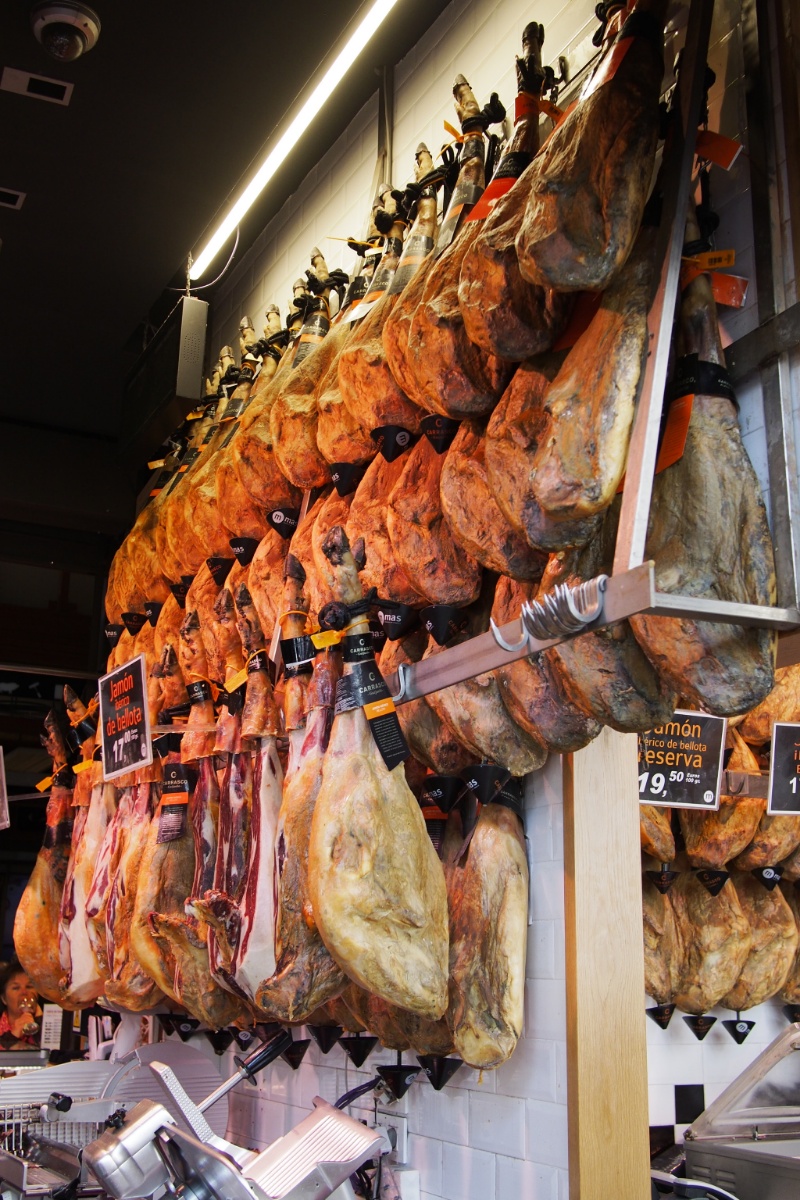 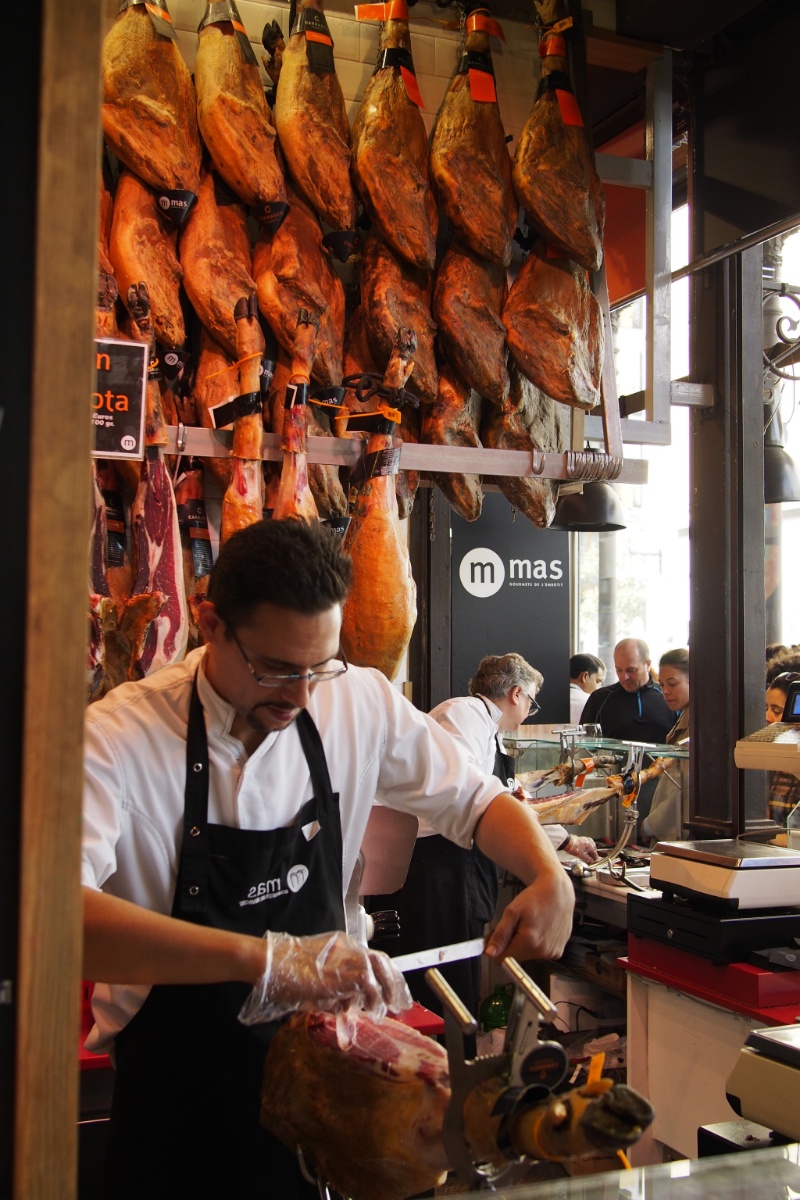 We went for a cone of jamon cutoffs, pieces that can’t be used as slices but are great for finger food.  I think it was €12/$18AUS and a very generous portion. 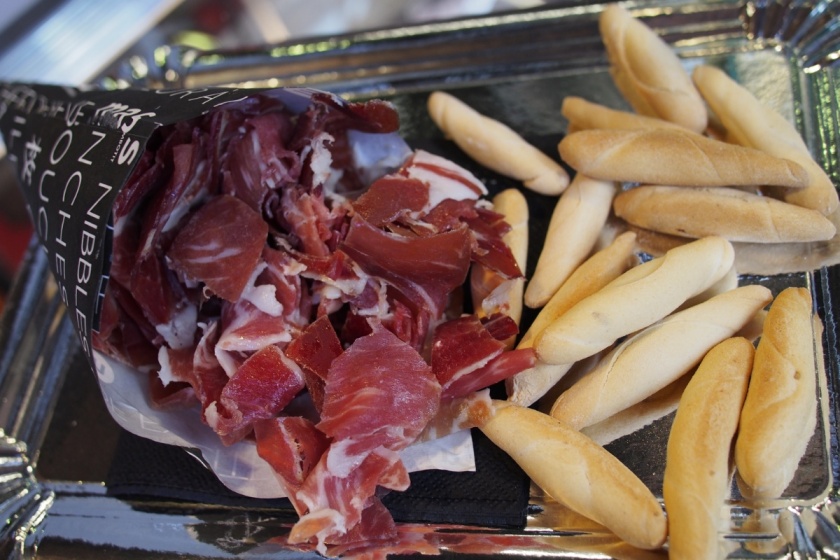 Thanks to a recommendation from our friend Joe all the way from Sydney, Australia (thanks Joe!), we found ourselves trekking uptown to Sala de Despiece which translates to the “cutting room”.  This is concept bar focusses on the ingredients in their raw unadulterated forms, as an homage to the butchers and fishmongers, their trade and skillsets. 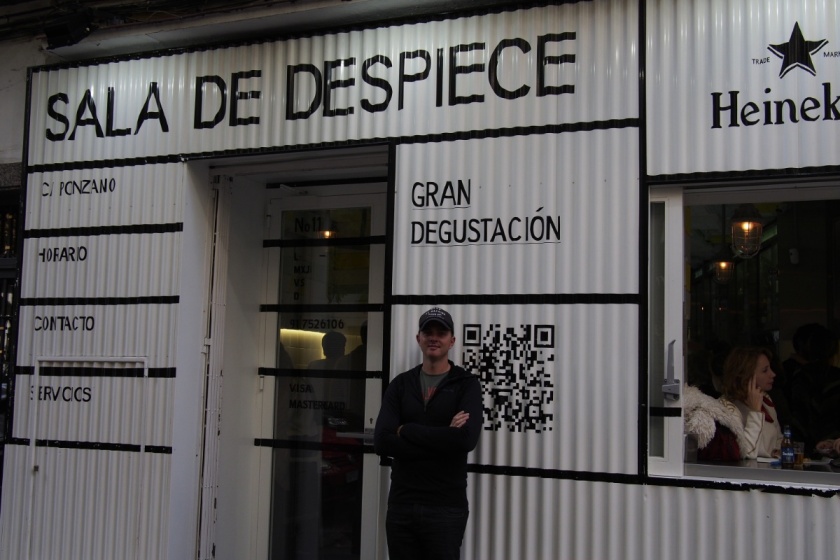 The inside is crammed full of people but a waiter will be ferreting in and out, settling us in with drinks and a packet of homemade potato chips while we waited for the go ahead.  The interior is covered in foam packing boxes, meat hooks carrying baskets of utensils swing from the ceiling and the team, covered in plastic white aprons, prepare the finishing touches on the stark white bench in front of you. It’s pretty much standing room only. 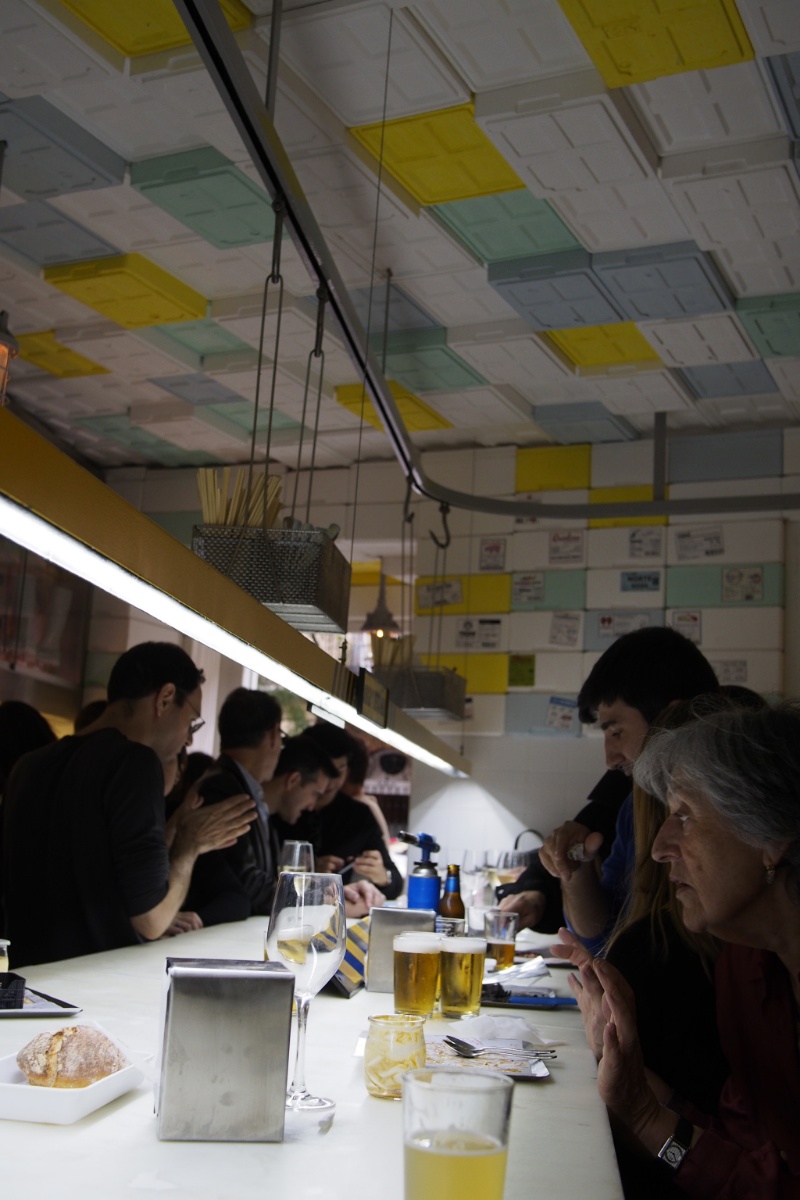 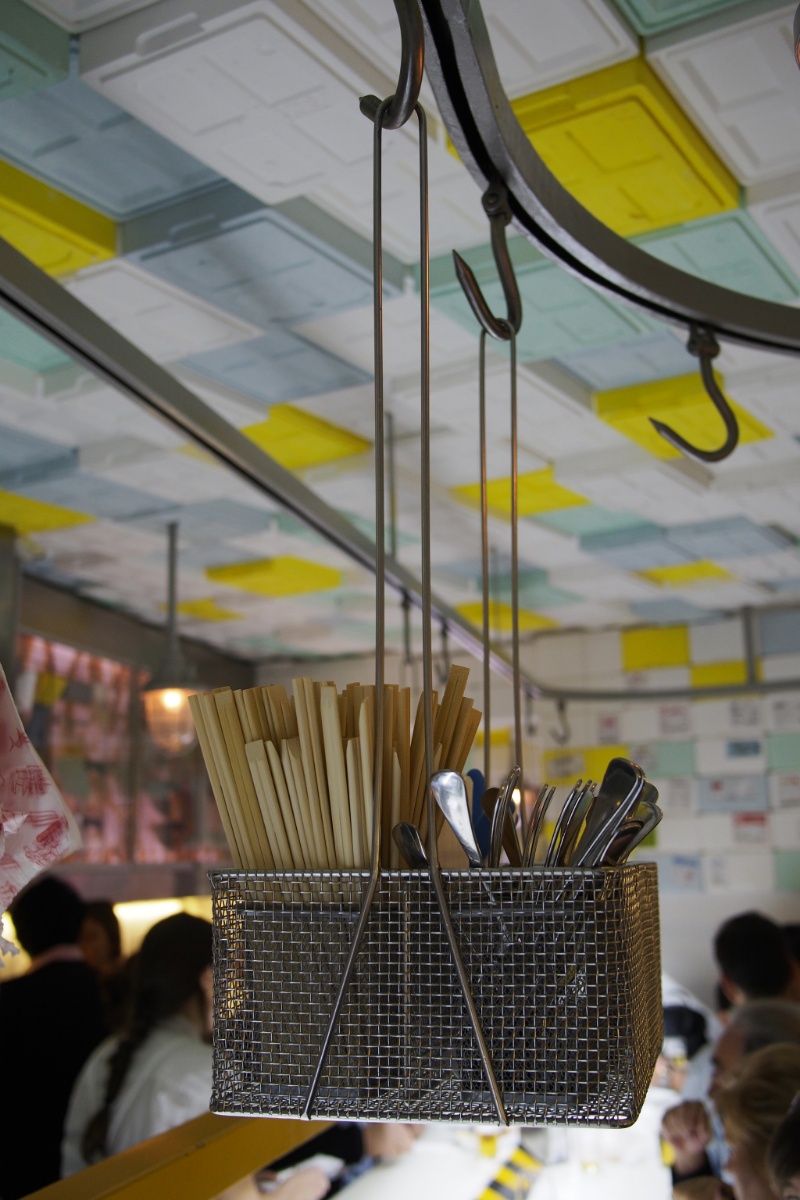 There is one English copy of the menu, truncated but lovingly handwritten, and we also pointed to our neighbors dishes.  The waiter grinned in approval with our order.  We had truffle and tomato beef carpaccio, grilled chilli jumbo prawns, a whole octopus tentacle with chimichurri, and the theatrical spectical of beef cheek torched in solidified ghee, each slice charred with precision.  All up with a couple of beers it was €57/$87AUS (which is an absolute bargin) and one of the most phenomenal meals we’ve had on the trip. 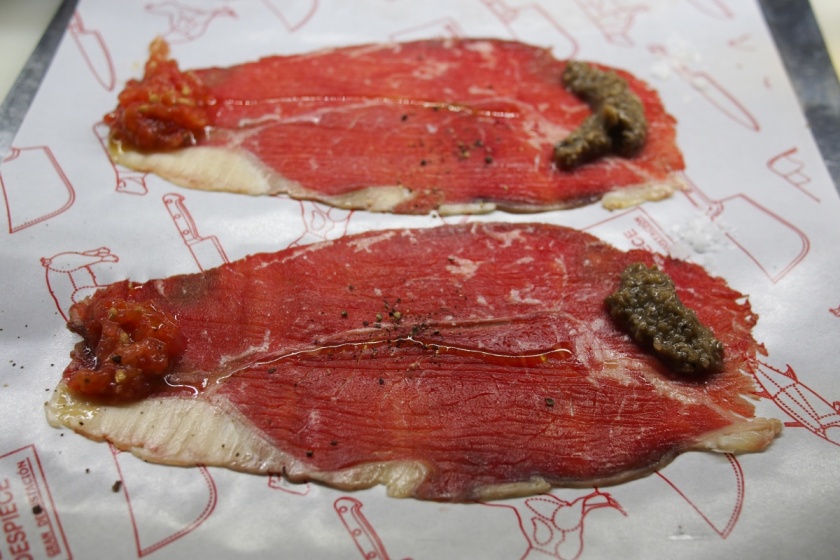 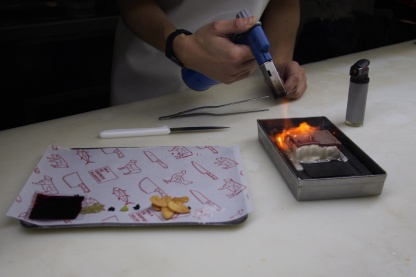 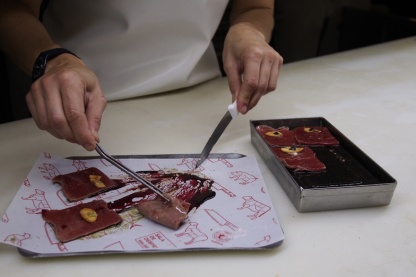 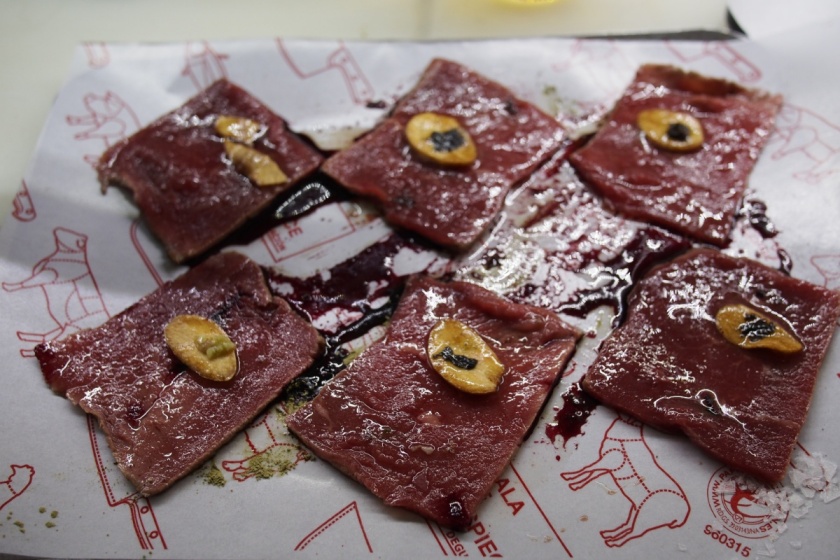 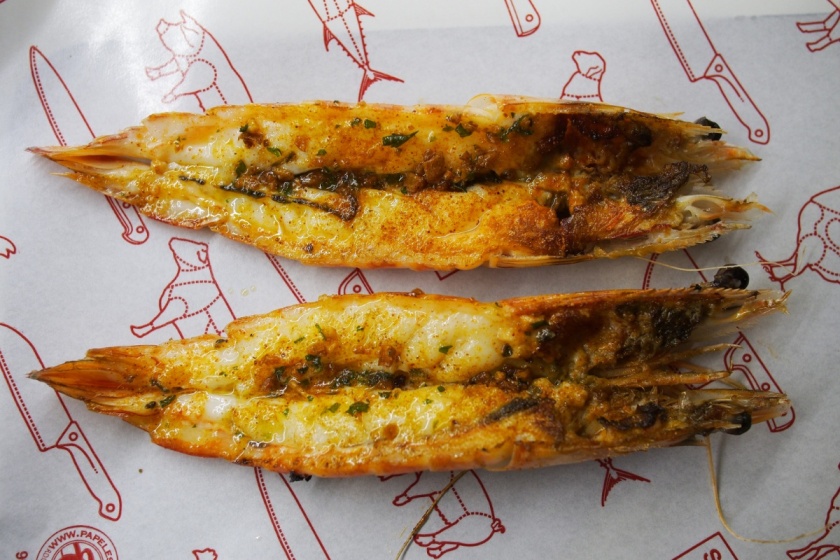 After all that meat eating we did reel it back in and cook a few lunches in our AirBnB kitchen.  Paella… with chorizo.