Our last days in Dubrovnik were slow and lazy, making the most of the beach weather.  We would usually start the day with tea which always came with honey and lemon instead of milk.

Walking down numerous stairs to get where we needed to go.  Dubrovnik is squat and compact, set steep across a hillside and you can’t escape stairs. 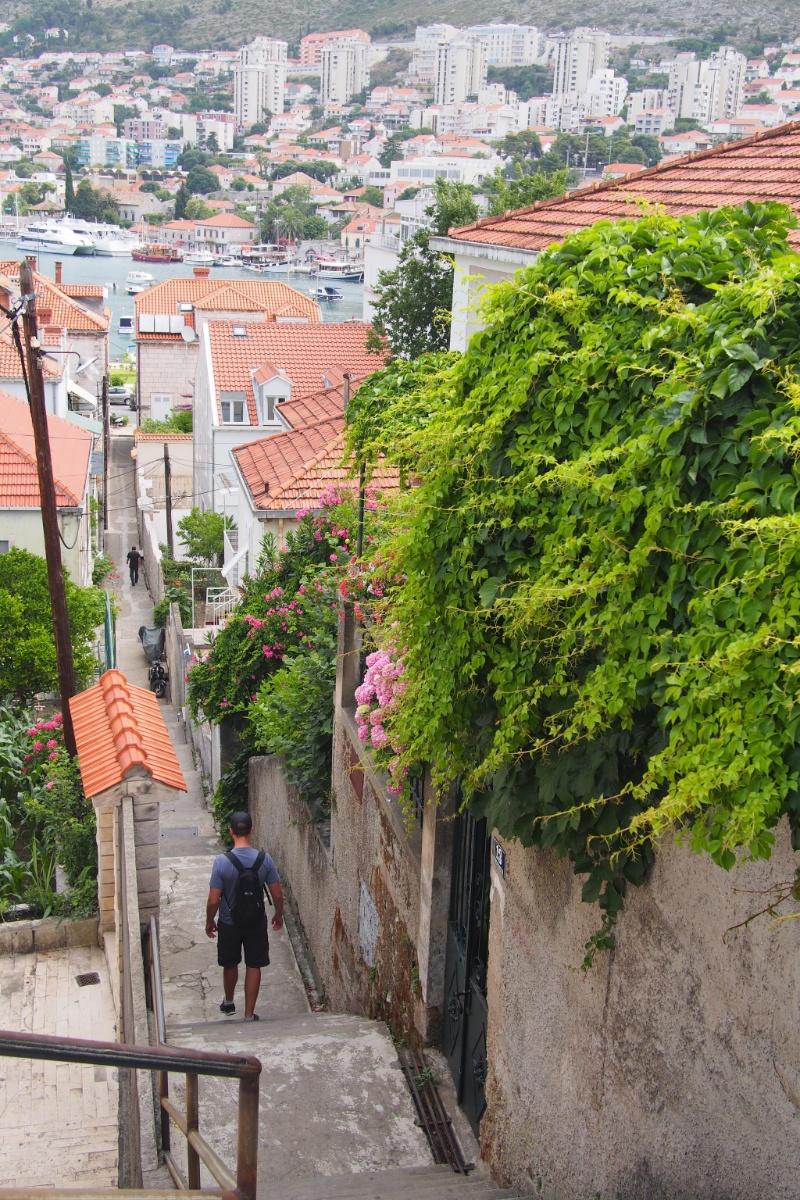 Strolled down to Lapad Beach.  Ignored the crowded sand and kept walking along the headland to find a bunch of little stairs and platforms cut into the rock.  And got a mini salt-water pool all to ourselves! 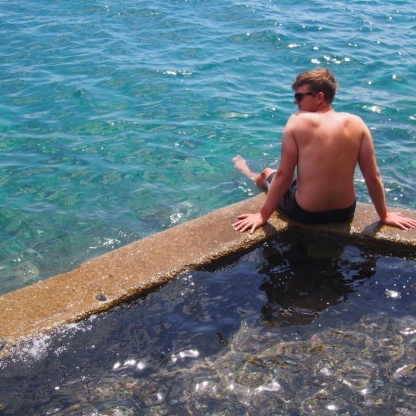 The next beach to try out was Banje Beach, one of the most popular beaches here as it has a great view of Old Town.

Half the beach is taken up by a stonking big club and their stupid overpriced beach chairs but no matter, we found a sandy spot, free, and settled in for the rest of the day. 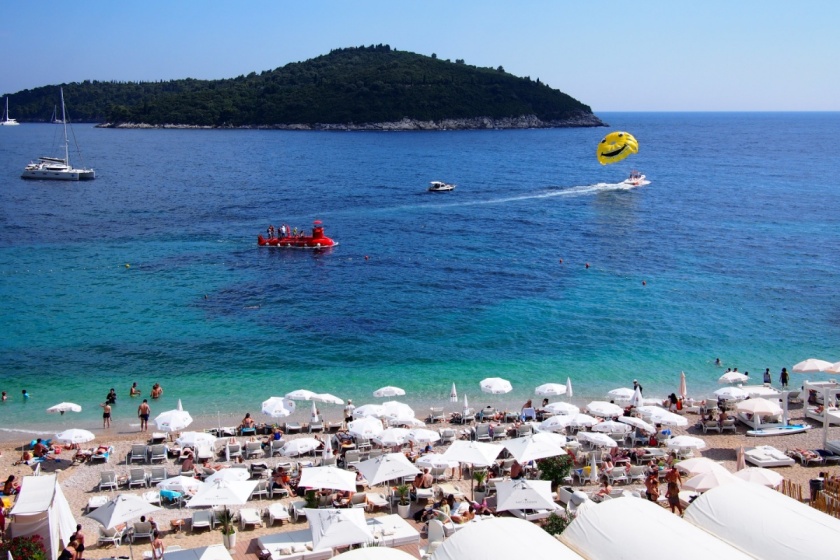 Toasted and sun-baked until the techno music started blaring we took the hill down into Old Town.  And made some new friends. 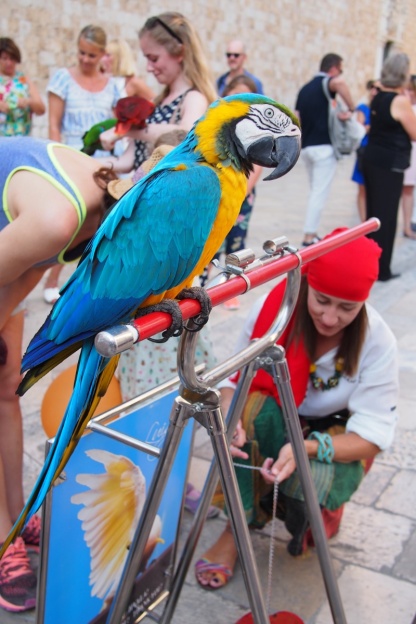 These guys are in the main square at around 7pm, when the temperature gets a little cooler.

Walking through the old fortress we noticed a door in one of the outer walls.  Squeezing through we found ourselves at Buza Bar, a tiny bunch of tables carefully perched directly on the outer cliff face with a million-dollar view.

The prices are western standard but if you want to stay longer just buy your beers at a supermarket and stake out a claim on the non-bar rock ledges below.  Same view for less.

Soon it was time to pack up and find a non-stair route to Dubrovnik’s Port.

Where Jadrolinija, our overnight ferry to Bari, Italy was waiting. 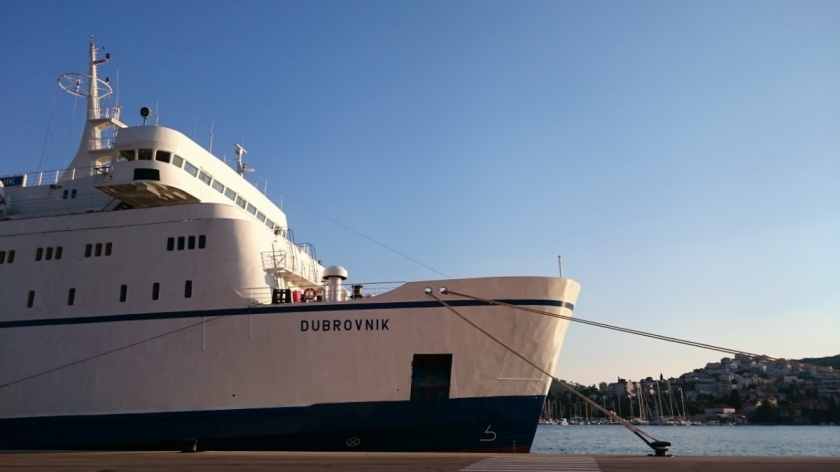 We joined the motorcycle line and were one of the first to board.

There are three ticket options, a room, a reclining chair or deck space.  We had bought the cheapest tickets, the deck tickets at €117/$172 AUD for both of us, which meant you claimed a space where you could.  Most people beelined to the restaurant, trying to grab as many dining chairs as they could.

We calmly unpacked our inflatable mattresses and pillows and stretched out in a corner until morning.  Carrying camping gear does have its perks! 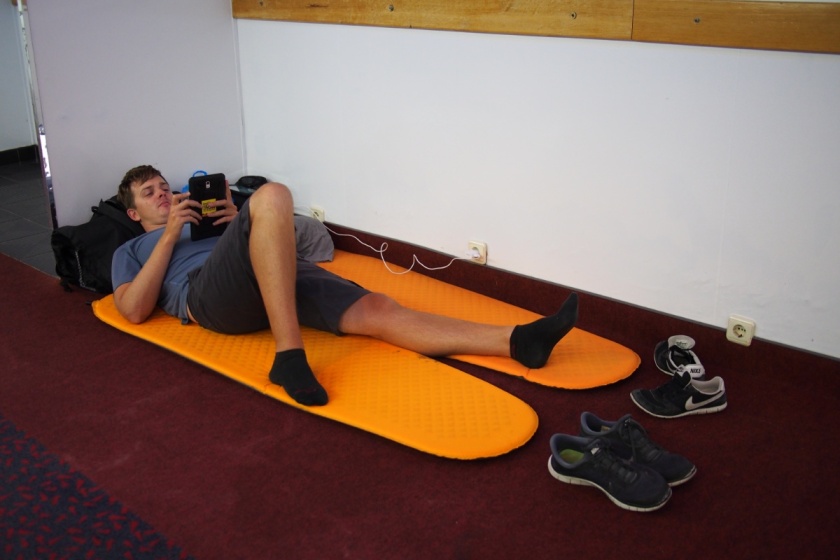 And then off to Bari for our first sight of Italy!