At 5.30am in the morning Cleave shook me awake begrudgingly and with much complaining.  After seeing three cruise ships docked in the harbour oozing out thousands of people onto the dock and being smushed by the crowds in Old Town we put on an alarm hoping to beat the masses.  Of course now that it was the crack of dawn it was hard to remember the enthusiasm we originally had.  At 6am we stood bleary-eyed at Pile Gate, the main entrance to the old city.  Usually packed by ice-cream fuelled crowds by day it was eerily devoid of any signs of life.

Apart from the street cleaners we had the whole place to ourselves to explore with clear uninterrupted shots at any angle we liked.

Dubrovnik, a UNESCO World Heritage site of an amazingly preserved medieval walled city, was one of the most prosperous and advanced maritime republics of all time.

Its Old Town was witness to many of the most impressive economic, social, and cultural achievements of Dubrovnik over the centuries.  An early adopter on new laws and institutions including abolishing slave trade, Dubrovnik merchants would trade and sail under a white flag with the word Libertas (freedom) prominently displayed.  At this quiet hour you could really feel the history from the soapy limestone slabs made slippery from centuries of footsteps.

By 7am more people began to arrive, delivery vans dropped boxes of beer and vegetables, shopkeepers unlocked doors and opened awnings, tables were set for the next wave of visitors and slightly sleepy, disoriented travellers lugged huge suitcases from taxis. 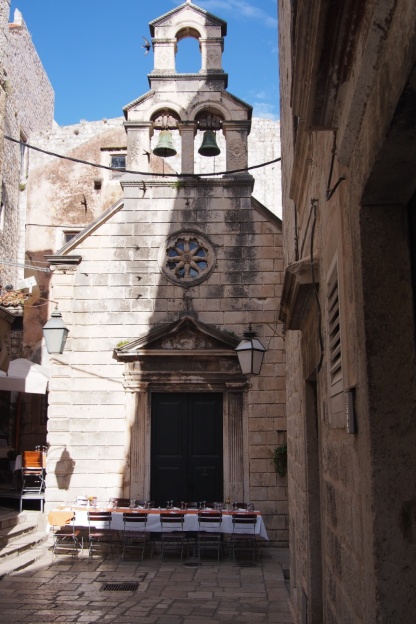 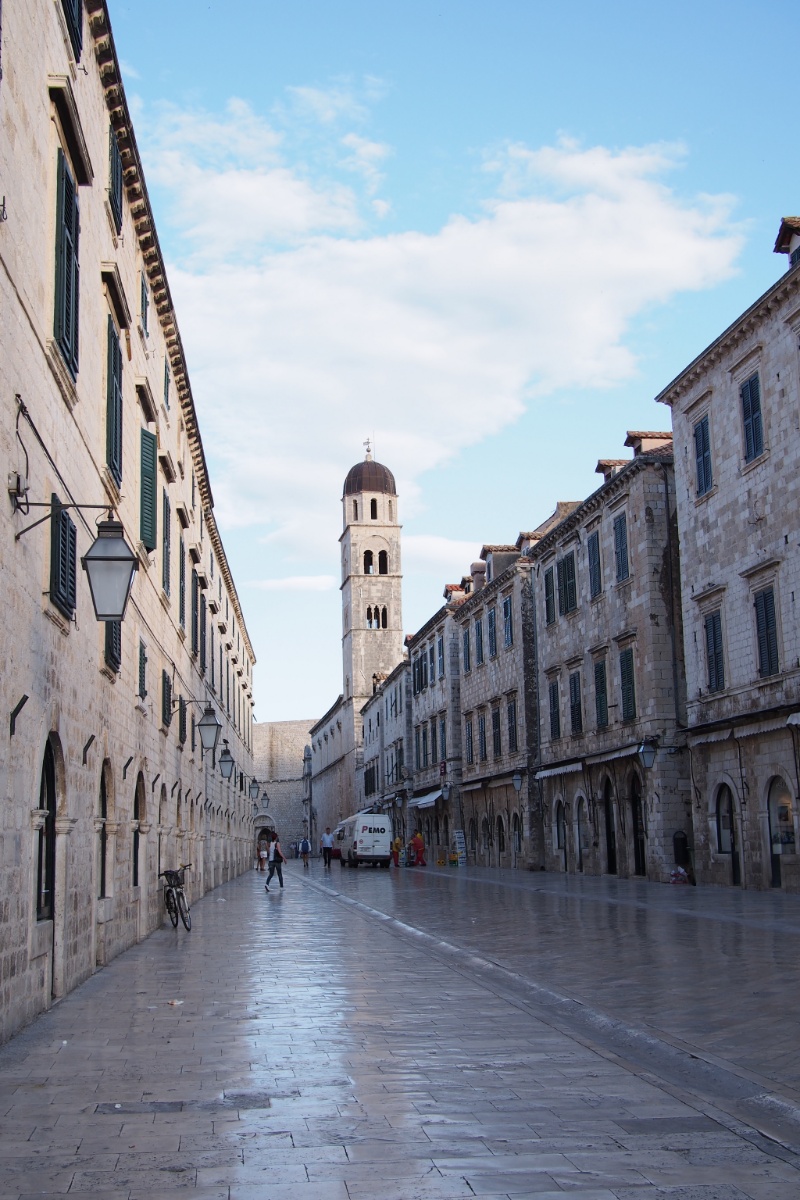 We grabbed a few pizza pockets from a bakery and then sat in a cafe shaking the last yawns out with tea and coffee.

At 8am the city fortress walls opened for climbing.  The defenses, almost 2km long and 24 metres high, were built between the 8th and 16th century to protect the vulnerable city and today sees almost a million visitors.  We paid the 100kn (€13/$20AUD) entry fee each and were rewarded with being one of the first groups up the stairs.

On one side was the sea stretching out into the horizon. 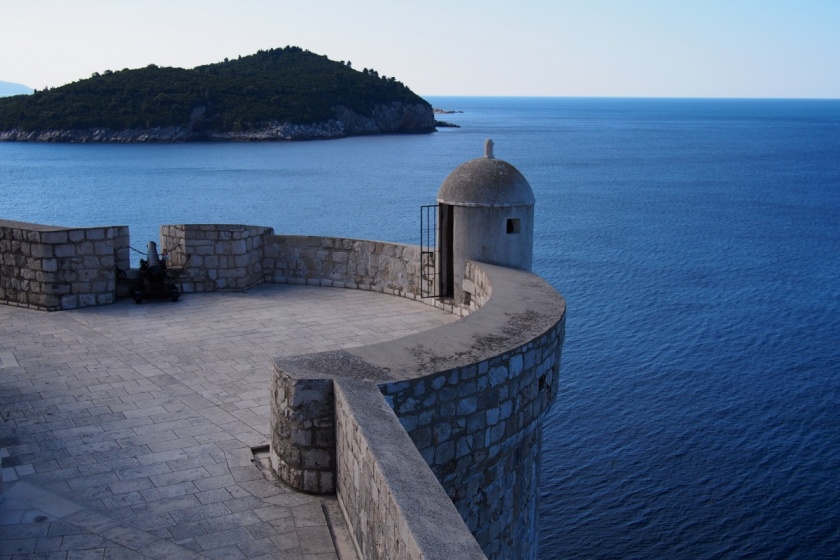 The other was gorgeous terracotta roof views of the entire Old Town. 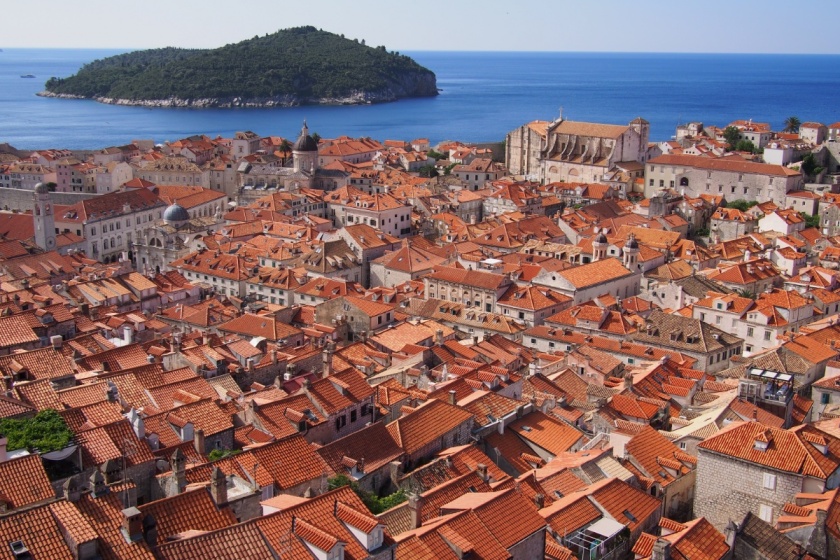 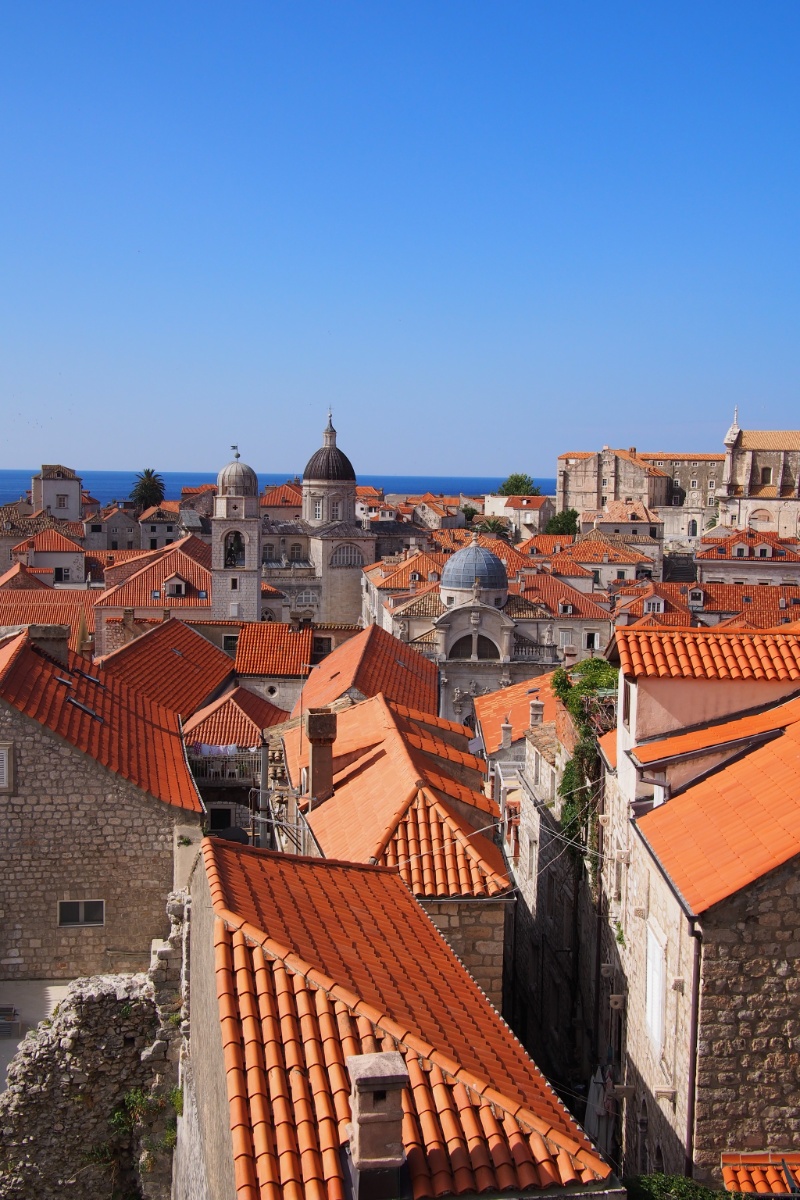 Apart from its own history and beauty, Dubrovnik has seen a surge in popularity due to its starring role in the TV hit series “Game of Thrones” where the Old Town has stood in for ‘Kings Landing’, ‘Qarth’ and other fictional places.  There are lots of “Thrones” walking tours to choose from.  Much of the filming took place on the city walls and its very easy to see why. 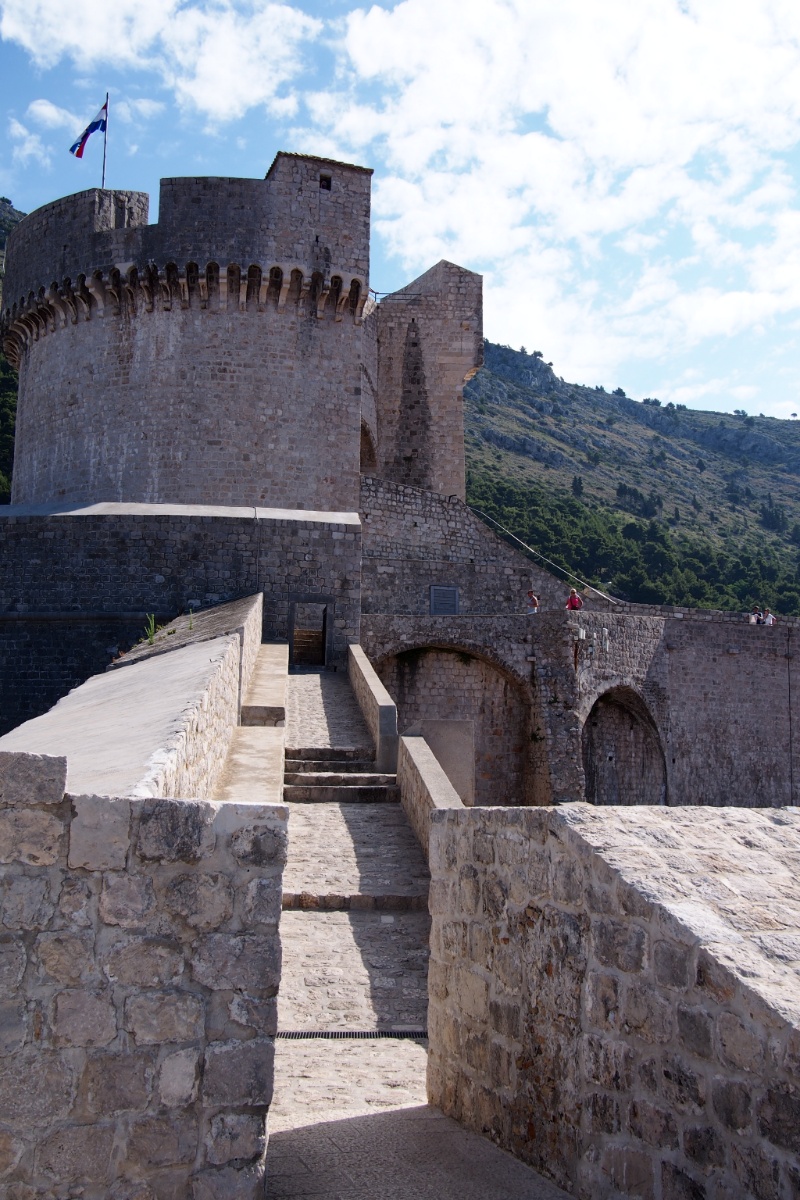 From your bird’s-eye view you could distinctly see the walls dividing old and new. 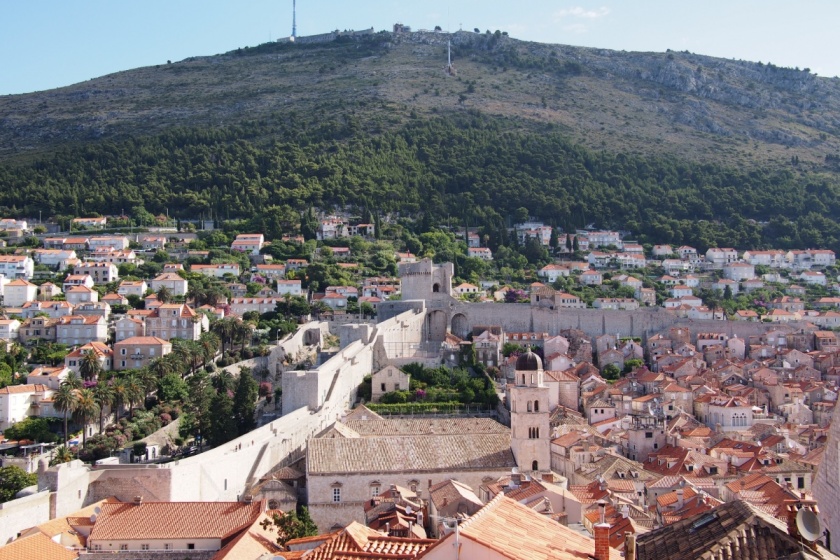 Peering over into the streetscape below. 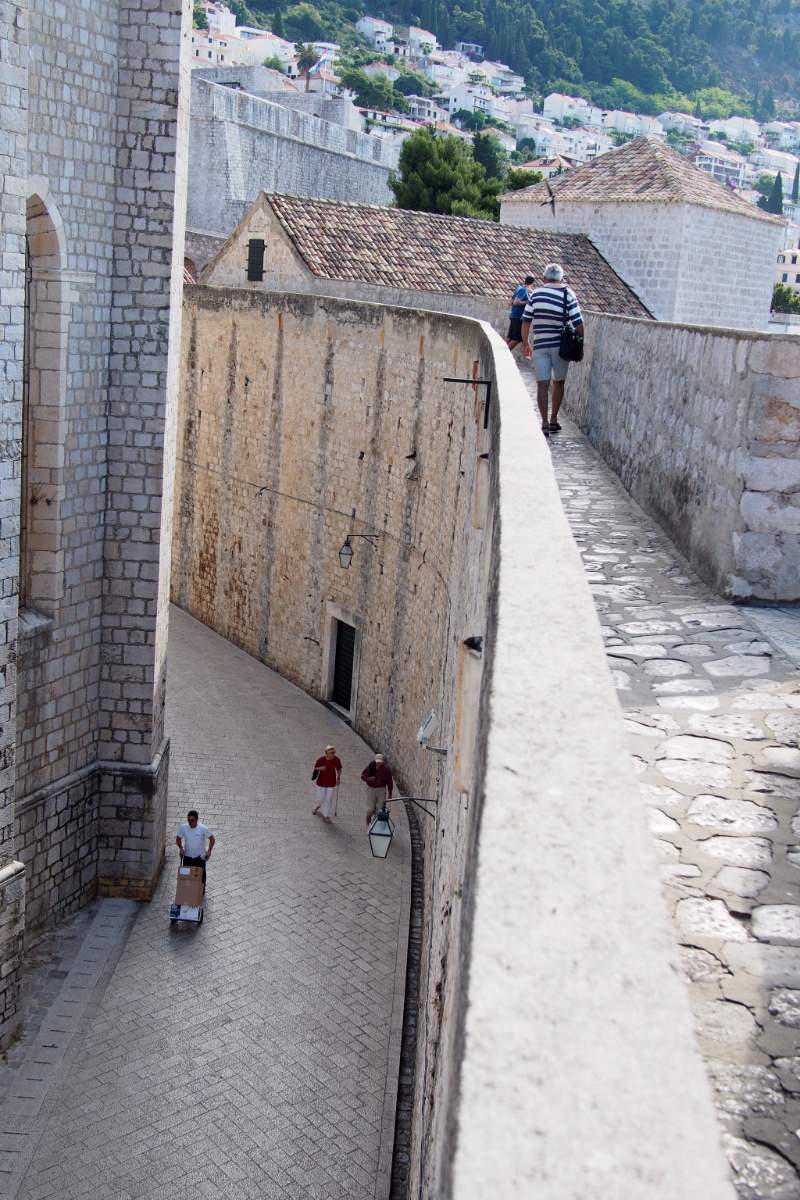 And every now and again a glimpse of history being proudly preserved. 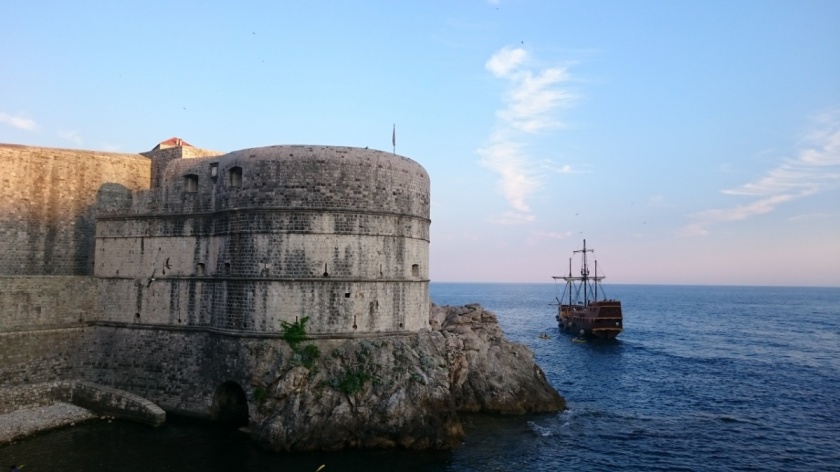